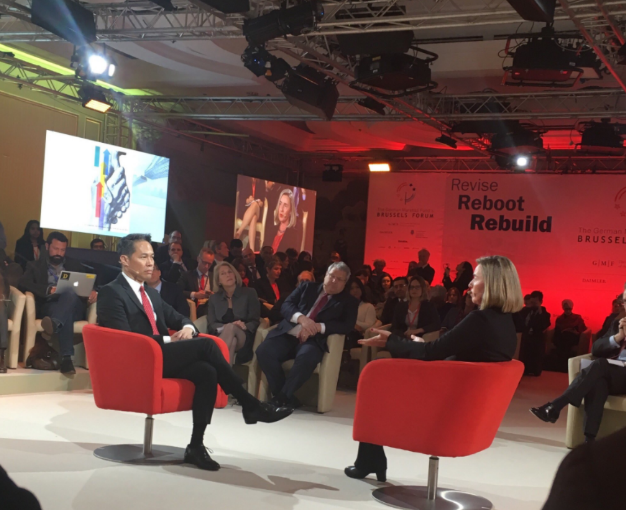 Towards A New Middle Eastern Disorder

Under the 2018 year’s theme, Revise, Reboot, Rebuild: Strategies for a Time of Distrust, the German Marshall Fund’s (GMF) Brussels Forum convened on 08 – 10 March 2018 in Brussels. 2018 marked the third time ELNET EU & NATO partnered with the GMF.

Highlights of this year’s conference Brussels Forum were a discussion with the EU High Representative for Foreign Affairs and Security Policy/ Vice President (HR/VP) of the European Commission Federica Mogherini, and a conversation with former US Secretary of State Dr. Madeleine Albright and CEO of the World Bank, Kristalina Georgieva. Another spotlight was the discussion with the Polish Prime Minister Mateusz Morawiecki and an all-female panel, including NATO’s Deputy Secretary General, Rose Goetemoeller.

This year, the ELNET Brussels office invited the Director General of the Israeli Ministry of Intelligence, Chagai Tzuriel, and its Spokesperson, Arye Shalicar to speak at the ELNET roundtable on the topic ‘Towards a new Middle Eastern Disorder.’

Mr. Tzuriel before joining the Ministry of Intelligence retired from the Mossad after 27 years of service, during which he acted as the Head of the Research and Analysis centre, as well as the representative to the US and Deputy Division Head for Strategic Affairs. Mr. Shalicar was the Spokesperson of the Israeli Defence Forces (IDF) up to 2016 until he joined the Ministry of Intelligence a bit more than a year ago.

The panel also included speakers from the Gulf, Turkey and the UK and was moderated by a Senior Fellow from the GMF.

Despite coming from different regions, backgrounds and positions, the various speakers agreed upon a lot of details when coming to the current state of play of the Middle East. First of all, the discussants concurred that all players involved in Syria had to develop a “Syria First” Strategy. Secondly, it was clear to all participants that Iran has a destabilizing role in the region and rising tensions and clashes are caused by the regime. In that regard, the group also agreed that the Joint Comprehensive Plan of Action (JCPOA) aka the nuclear deal consisted of flaws which ought to be fixed – therefore also awaiting Trump’s announcement in May 2018. All participants in the discussion supported the idea of strengthening moderate factions, in particular the Sunni Arab camps. Thirdly, the participants underlined the strategic importance of Russia in and for the region.