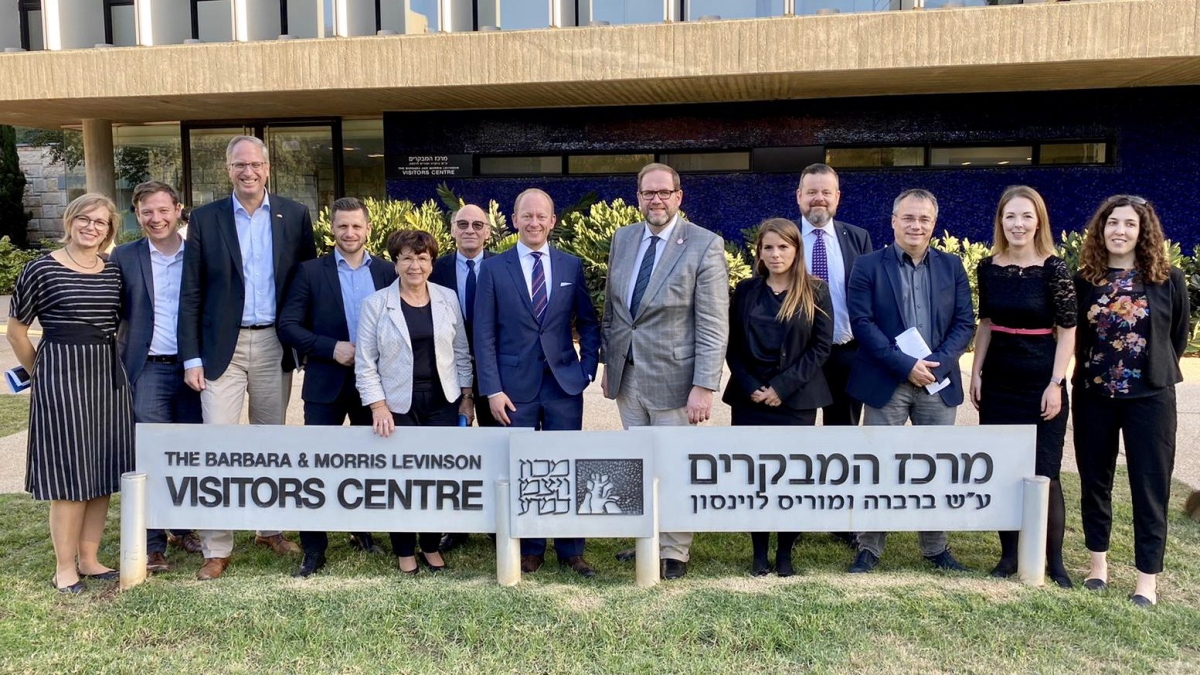 From November 24-28, ELNET-Germany brought a delegation of members of the CDU/CSU Friendship Group Israel to Israel. The delegation comprised 12 participants, ten of whom are active members from seven different state parliaments (including three heads of faction) and two are former members of state parliaments. The trip provided participants a comprehensive overview of the challenges as well as opportunities that Israel faces these days.

The program opened with a meeting with Dr. Susanne Glass, Bureau Chief and Chief correspondent of the ARD Studio in Israel (the ARD is one of the biggest public TV broadcasters in Germany). Dr. Glass reported about the work of German journalists in the region and the perception of Israel in German news. Afterward, the delegation met with Dr. Emmanuel Navon, professor of international relations at Tel Aviv University, who briefed the group about current developments in the coalition-building process.

On the second day, the delegation took part in a guided tour through the holocaust memorial Yad Vashem and laid down a wreath in remembrance for the victims of the Shoa. For the delegation, this was a very emotional and moving but nonetheless essential part of the program.

The tour followed a meeting with Khaled Abu Toameh, an Arab-Israeli journalist who offered his insights into Arab-Jewish cooperation in the Knesset. Abu Toameh pointed out that while Arab and Jewish parties do not always agree on everything, the Arab population of Israel stands behind the Jewish state.

During an exclusive briefing with Member of the Knesset Ofer Shelah (Blue and White) the delegation discussed the most pressing security issues that the country is facing these days. Shelah highlighted that Iran poses an imminent danger not only to Israel but also to the entire region and beyond.

This statement was reiterated during a conversation with Haim Assaraf, Deputy Head of Division for Strategic Affairs, and Avrahim Nir-Feldklein, Head of Europe Division in the Ministry of Foreign Affairs. Both stressed that Iran’s activities in the region, including its terror financing of Hezbollah, Hamas, and Islamic Jihad, are Israel’s most pressing issues at the moment. They also emphasized that while Israel is capable of defending itself against these threats, it needs more political support from its international friends and partners, as well as a stronger commitment in the fight against terror financing.

The precarious security situation at Israel’s northern border could not have been illustrated more accurately by next day’s visit to the Lebanese border. The delegation convened right at the spot where, in 2006, Hezbollah killed three Israeli soldiers, kidnapped and murdered two others, and built six terror tunnels at 45 meters below the surface. Walking through the tunnels and talking with Col. (res) Sarit Zahavi, Head of the Alma Research Center, participants of the delegation were able to experience and see with their own eyes the danger that emanates from Israel’s enemies and the impact this has on the people living close to the border.

On the other hand, the exchange with Druze and Arab members of the Alma Research Center exemplified how different ethnic and religious groups within Israel live and work together. That being said, many of them voiced criticism of the Nation-State Bill passed the previous year.

The following day focused on the German-Israeli relations and Israel’s startup ecosystem. In the morning, the delegation met with German Ambassador to Israel Susanne Wasum-Rainer and engaged in a very informative albeit controversial discussion about Germany’s voting behavior in the UN. Subsequently, the group met with Grisha Alroi-Arloser, Executive Director of the German-Israeli Chamber of Commerce with whom they talked about German-Israeli economic relations.

During a meeting with Arye S. Shalicar, a German Jew with Iranian roots, the discussion focused on the ways to combat antisemitism in Germany.

In the afternoon, the delegation visited the Weizmann Institute of Science and met with Nili Shalev, Director General of the Israel-Europe Research and Innovative Directorate. The conversation focused on how investments in research on the one hand, and federal subsidies for startups, on the other hand, have shaped Israel’s economic and startup landscape. The closing meeting with Chagai Tzuriel, Director General of the Ministry of Intelligence, highlighted the importance, challenges, but also opportunities of the digitalized world, and how Israel and Germany can strengthen cooperation, particularly in the field of Artificial Intelligence.

On the last day, participants symbolized the close German-Israeli bond by planting holly oaks with the Jewish National Fund in Tzora Forest. The planting ceremony was a very emotional moment, wrapping up the experiences and impressions of the entire trip and enabling participants to leave a trace of their visit for many years to come.