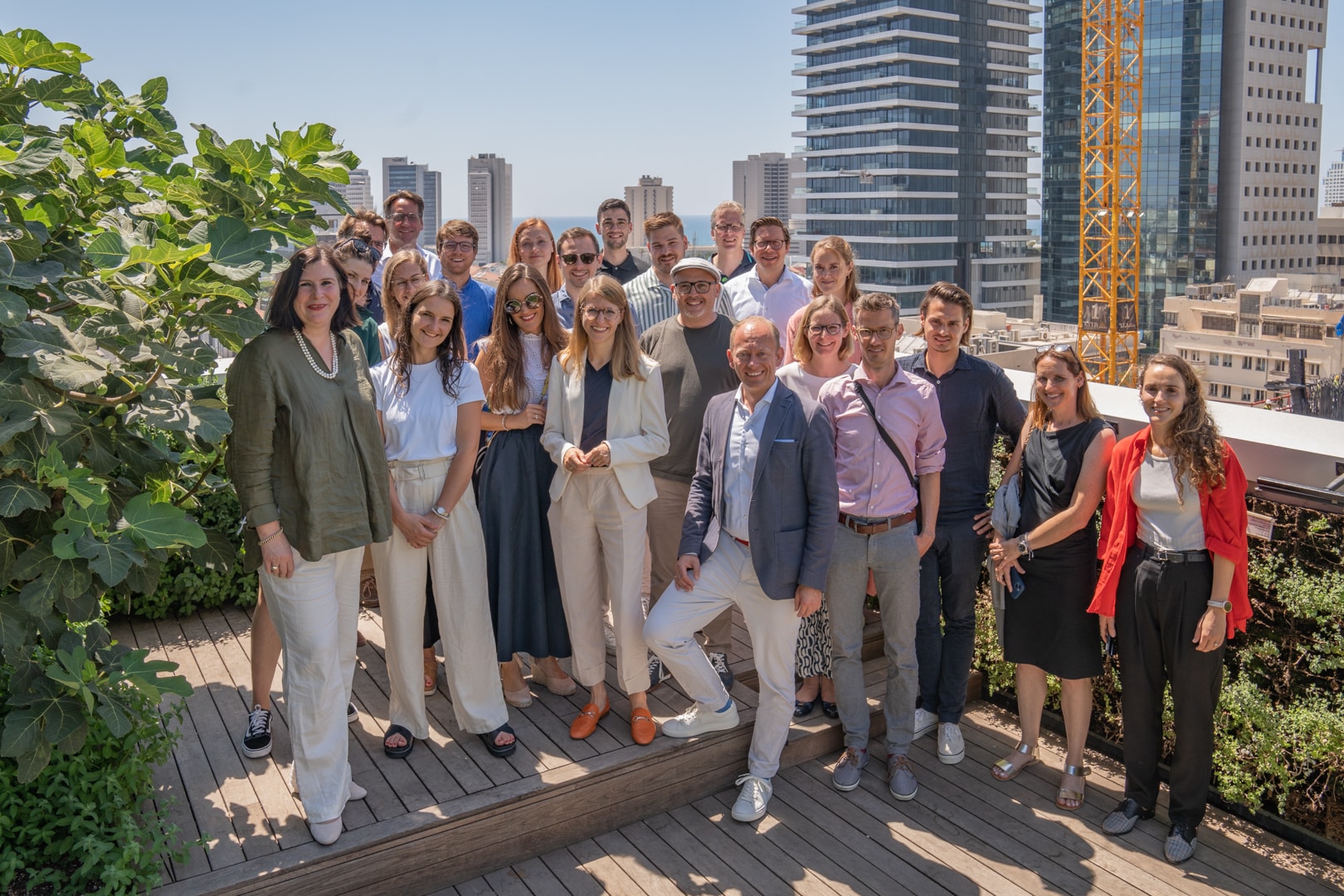 From July 3rd to 7th 2022, ELNET Germany again traveled to Israel with a delegation of 24 high-ranking participants as part ofthe innovation project German Israeli Network of Startups & Mittelstand (GINSUM) to take up the great success of the first GINSUM Digital Health delegation in November 2021. This had impressively shown how valuable a close exchange between Germany and Israel is in the field of digital health. In cooperation with ELNET’s Israeli office, the representatives from the healthcare industry, including large companies and start-ups, the Federal Ministry of Health and the German media landscape were presented with an exciting and diverse program that enabled them to immerse themselves in the dynamic Israeli digital health ecosystem.

The Israeli health system is one of the most modern and digitized in the world. The patient data of the approximately 9 million inhabitants have been available in digitized form for over 20 years, and the high density of digital health startups is impressive. There are currently well over 700, at the same time both the number and the amount of investment is increasing – a situation that Germany can only dream of now. With a larger pool of IT talent and better access to venture capital than in Germany, the starting point for young technology companies in Israel is extremely favorable. The pioneering technologies in the areas of patient monitoring, diagnostics and therapy that are being developed in Israel are used all over the world.

Yet many Israeli startups are looking to Germany, the largest healthcare market in Europe. To understand what lies behind Israel’s recipe for success with regards to the development of startups in the health sector, what Germany can learn in this area, and to explore cooperation opportunities on an economic level, GINSUM presented a diverse program for the participants in the newest edition of the Digital Health Delegation.

To convey a deeper understanding of the country and its unique health ecosystem on the evening of arrival, the former ARD correspondent and journalist Richard C. Schneider gave well-founded insights into the current political situation in Israel over excellent Israeli food. The governing alliance of eight parties has lost its majority after a year, and new elections will be held for the fifth time in three years at the beginning of November. Nevertheless, or precisely because of this, the mill of innovation does not stand still. Despite the political situation, which is difficult to predict, and ongoing security concerns, the digital health ecosystem is booming. Or maybe because of that?

Amongst other things, the lecture at the AHK Israel on the first day may lead one to this conclusion. The young country, with its innovative and entrepreneurial spirit, the “chutzpah” and the necessary self-confidence, as well as great drive and knowledge, makes a virtue out of necessity not only in the health sector.

The following days of the trip were characterized by exciting startup pitches and lectures at the main cooperation partner of the delegation, Start-Up Nation Central, as well as visits to in-hospital innovation and research hubs such as the Hadasit in the Hadassah Medical Center and the IMed in the Tel Aviv Sourasky Medical Center (Ichilov) where Prof Dr Ronni Gamzu, CEO Ichilov and member of the board of trustees of the German Israeli Health Forum for Artificial Intelligence (GIHF-AI), welcomed the delegation and gave an inspiring keynote speech. In addition to visiting the Israel Ministry of Health, where the delegation met Yoel Ben-Or, Head of Digital Health Policy, to discuss Israel’s digital health legislation, the delegation also visited the Holocaust memorial Yad Vashem and took a guided tour of the Old City of Jerusalem. Another highlight of the trip was the mental health event with a focus on post-traumatic stress disorders (PTSD) on the last day, which took place in cooperation with health.il and was hosted and moderated by Germany’s most well-known TV and internet doctor, Dr. Johannes Wimmer, member of the delegation and of the GIHF-AI Board of Trustees. The presentation of groundbreaking therapy options by three startups led to a lively discussion about mental health, a topic which ELNET Germany will continue to address.

Carsten Ovens, Executive Director ELNET Germany, summarized the trip: “The digital transformation of the German healthcare system can be significantly accelerated with know-how and technology from Israel. Against this backdrop, ELNET is intensively engaged, with GINSUM and GIHF-AI, in the exchange between the two countries and supports the development of new cooperations. The networks we established were certainly further strengthened and expanded by the intensive program of this second digital health delegation. To be continued.”

PrevPreviousBiden’s visit: Think big and go for a broad 3-way deal
NextDeal or no deal, Israel must prepare to stop Iran’s nuclear breakoutNext