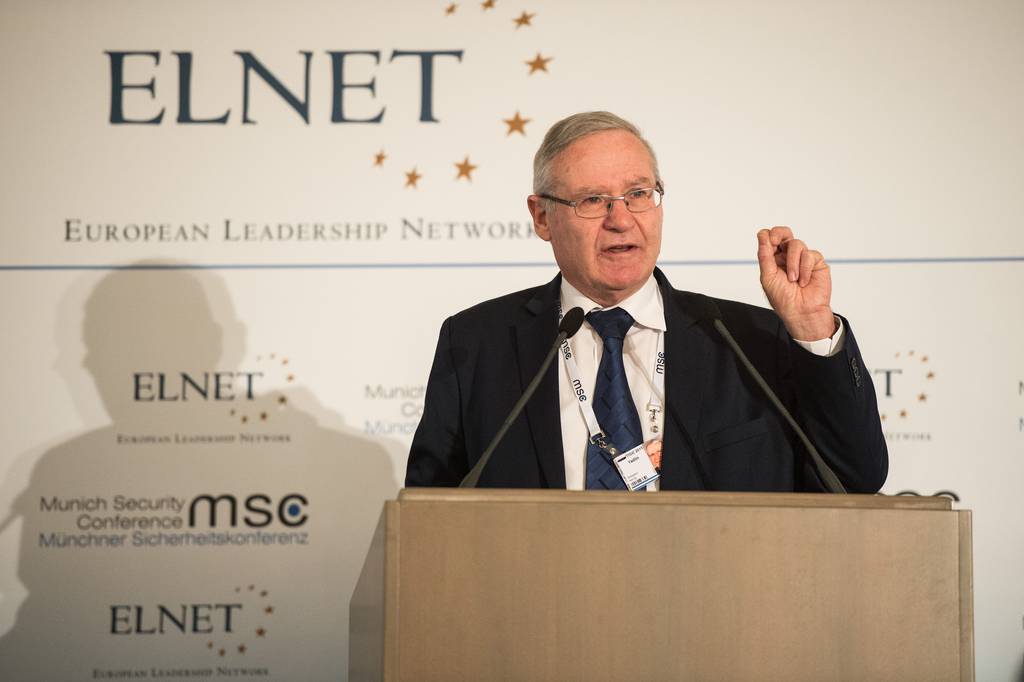 The Forum of Strategic Dialogue encourages open discussions between high-ranking officials as part of the organization’s efforts to strengthen Israel-Europe relations.

Maj. Gen. (res.) Amos Yadlin, former Head of the Israeli Defense Intelligence, former Director of the Institute for National Security Studies (INSS), and senior security and foreign policy expert, becomes senior adviser to ELNET, an organization dedicated to strengthening Israel’s relations with European countries and the European Union. Maj. Gen. (res.) Yadlin will also chair the organization’s Forum of Strategic Dialogue, along with his other engagements.

Maj. Gen. (res.) Amos Yadlin served for more than a decade as Director of the Institute for National Security Studies (INSS). Moreover, he served 41 years in the IDF, as a member of the General Staff, Deputy Commander of the Air Force, Commander of Combat Squadrons, and Commander of Air Force Bases. During his service in the Air Force, he crossed multiple enemy lines and participated as a combat pilot in the Yom Kippur War, in addition to taking part in attacks on nuclear reactors in Iraq.

Formerly an IDF attaché to the United States, Maj. Gen. (res.) Yadlin served as Head of the Defense Intelligence Directorate from 2006-2010. In 2015, he was a candidate for defense minister of the “Zionist Union.”

Among Yadlin’s academic credentials are degrees in economics and business administration with honors from Ben Gurion University of the Negev, as well as a master’s degree in public administration from Harvard University. Major General (ret.) Amos Yadlin joined the Belfer Center at Harvard University as a senior fellow in September 2021 and also serves as a consultant to international companies.

Maj. Gen. (res.) Yadlin: “Europe is an important player in international affairs and a key partner of the United States in leading the free world. Europe can play a significant role in addressing critical challenges facing Israel, such as Iran’s nuclear program, the global wave of antisemitism, and promoting normalization between Israel and Arab countries. After the U.S.’ withdrawal from Afghanistan, strengthening alliances with key European countries is of increasing strategic significance to Israel’s national security. I am proud to assist ELNET in its efforts to facilitate dialogue and understanding between Europe and Israel.”

Shai Bazak, CEO of ELNET-Israel, expressed his appreciation for Maj. Gen. (res.) Yadlin’s decision to join the organization’s efforts: ” ELNET’s Forum of Strategic Dialogue is a platform that enables high-level strategic discussions between Europe and Israel, beyond the constraints of formal intergovernmental relations. We are very happy to welcome Maj. Gen. (res.) Yadlin on board. I am fully confident that together we will continue to promote international initiatives that benefit Israel. This is a significant step for ELNET and I am sure that Yadlin’s insights and rich experience will be of great value.”

As part of ELNET’s activities throughout Europe, with regional offices in London, Paris, Berlin, Brussels and Warsaw, the Forum of Strategic Dialogue serves as a unique vehicle for informal consultations between Europe and Israel’s top governmental officials and experts and allows for out-of-the-box problem-solving thinking in the fields of defense, security, foreign affairs and economy. In the recent years, ELNET launched a U.S.-Europe-Israel Trilateral Strategic Dialogue, as well as an annual Europe-Middle East Forum.

ELNET brings together leaders who believe in the importance of close relations between Europe and Israel, based on shared democratic values and common interests.

To this end, ELNET has established an effective network across Europe, and offers a broad menu of programs facilitating in-depth policy discussions between senior European and Israeli officials and hosts high-level delegations to experience the reality on the ground.