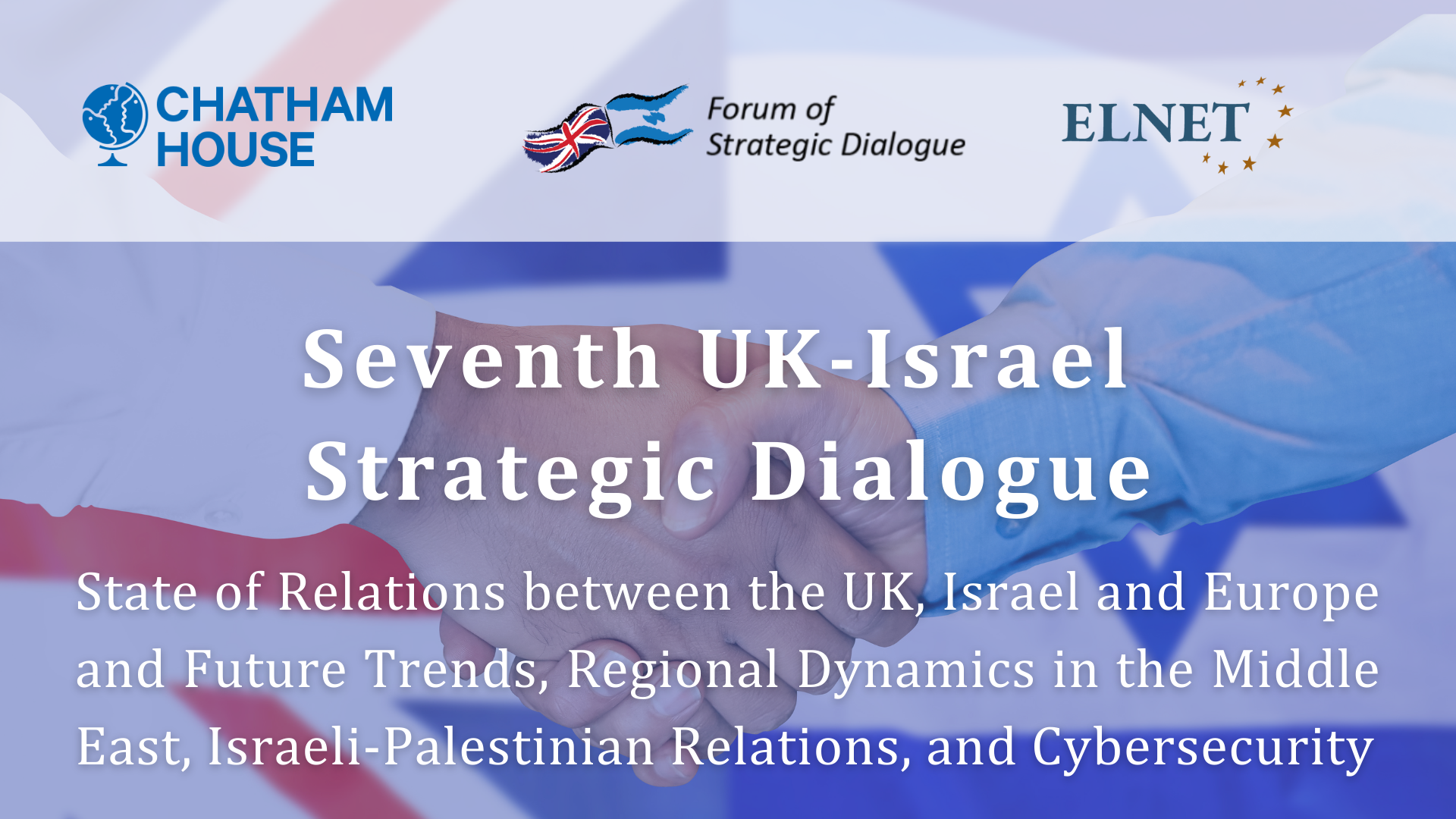 The European Leadership Network (ELNET) and the Forum of Strategic Dialogue (FSD), in partnership with London’s Royal Institute of International Affairs (Chatham House), held the seventh “Strategic Dialogue” between the UK and Israel.

The conference included sessions with Israeli Ministers, Members of the Knesset Foreign Affairs and Cyber Security Committees, the Director General of the Israeli MFA Peace Process Division and a keynote from Major General (Ret.) Amos Yadlin, Chair of the Forum for Strategic Dialogue and Former Head of the IDF Defence Intelligence Directive.

To begin proceedings, Professor Eviatar Matania, Former Head and Founder of the Israel National Cyber Bureau and Head of the Security Studies Programme at Tel Aviv University briefed participants on Israel’s footing with regard to Cyber-AI Supremacy. This, followed by a visit to Start-Up Nation Central offered a detailed and insightful view of Israel as a key player in the fields of high-tech and innovation.

Joan Ryan, ELNET UK Executive Director later welcomed all delegates present and thanked the UK Ambassador to Israel, Neil Wigan, for kindly hosting the evening’s events. Joan acknowledged new found strengths which are propelling the UK-Israel bilateral relationship, and recognised that under the current Government our nations have progressed from friendship to a long and substantial partnership. Amb. Neil Wigan addressed the delegates and remarks also from his Israeli counterpart to the UK, Amb. Tzipi Hotovely, who travelled to Israel specifically to present at the welcoming dinner and spoke of the importance in maintaining and nurturing our UK-Israel partnership. Such statements ensured the evening created an opportunity to hear first-hand accounts of the upcoming developments which foster UK-Israel cooperation. Shai Bazak, Executive Director of ELNET-Israel and Dr Robin Niblett CMG, Director and Chief Executive at Chatham House addressed guests on the successful collaboration between the Forum for Strategic Dialogue and ELNET, bringing industry experts, together with high-level politicians, diplomats and academics, into meaningful and fruitful dialogue on key strategic issues in the presence of those in pivotal positions when it comes to UK-Israel bilateral relations.

Several sessions were held the following day, each referring to key focus areas the conference was constructed around. UK Shadow Minister for the Middle East and North Africa, Bambos Charalambous MP, opened the round table discussion. Focussing first on the state of relations between the UK, Israel and Europe, delegates heard from Lord Stuart Polak CBE, Honorary President of Conservative Friends of Israel, alongside MK Professor Yossi Shain, Member of the Knesset Foreign Affairs and Defence Committee and Chair of the Knesset Delegation for Relations with the European Parliament. Exploring regional dynamics in the Middle East, addressing the pressing issue of Iran and the developments to the negotiations taking place in Vienna, Amb. Oded Joseph, Deputy Director General of the Middle East and Peace Process Division at the Israeli Ministry of Foreign Affairs lead proceedings. Dr Sanam Vakil, Deputy Director and Senior Research Fellow at the Middle East and North Africa Programme, Chatham House, as well as Lord Walney, House of Lords Peer and the UK Government’s Independent Advisor on political violence and disruption, gave insightful remarks which also focused on the threats of key regional players in the Middle East, and with regard to the progress of any revival in JCPOA negotiations.

In a session on Israeli-Palestinian relations, co-existence and future plans for economic development, delegates heard from Chair of Labour Friends of Israel, Steve McCabe MP. The issue of how the Israeli-Palestinian conflict plays out in UK political discourse brought about a multifaceted discussion on the various implications and effects which alter the perception of Israeli society in the UK and internationally.

With a final focus on Cybersecurity and the common cybersecurity vulnerability of both the UK and Israel, discussions concerning areas of future bilateral cooperation re-affirmed the scope of collaboration to be seized in a deeper and more prosperous UK-Israel bilateral partnership. Led by Professor Yossi Mekelberg, Associate Fellow, Middle East and North Africa Programme, Chatham House, and also with an address from Brig. Gen. (Ret.) Ehud Schneorson, Managing Director at Blumberg Capital and former Unit Commander in the IDF, the afternoon closed with a reminder of the potential behind a greater strategic relationship between these two nations, and where regional challenges and socio-economic aspirations very much align.

Strategic Dialogues offer the opportunity for parliamentarians, opinion formers and academics to engage and share knowledge on some of the most important challenges facing Europe and Israel and indeed globally. Discussions are of great value, candid and held under Chatham House rules.

“Overall, the Dialogue has provided everyone involved with a fresh insight and momentum to strengthen even further the relationship between the UK and Israel”