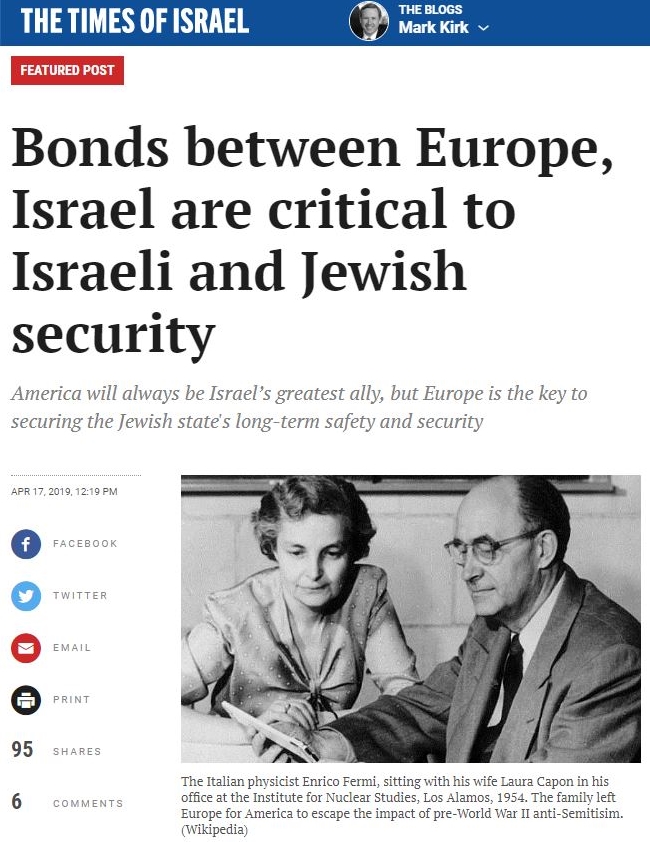 Bonds between Europe, Israel are critical to Israeli and Jewish security

America will always be Israel’s greatest ally, but Europe is the key to securing the Jewish state’s long-term safety and security

Article by Mark Kirk, Former U.S. Senator and the Chairman of the Friends of ELNET Advisory Committee for the Times of Israel

In the autumn of 1938, a young couple with two small children fled the fascist Italian state led by Benito Mussolini, an ally of the Nazi regime, out of fear of persecution. Hostilities against Jews were rising to a fever pitch. Laura Fermi, a Jew, and her husband, Enrico, knew their family would be at-risk if they remained in Italy. So, in what may have been one of the most fateful decisions of the 20th century, the Fermis left for America, where they eventually found themselves in Chicago, Illinois. Less than 10 years later, Enrico would help defeat the European fascism and Nazism that caused his family to flee, as well as Japanese imperialism, through his work on the atomic bomb.

Throughout history, societies built on fear have driven away the best and the brightest. Intolerance is the enemy of creativity, artistry and new ideas that make a nation strong and dynamic. Nazi Germany drove out Einstein. The Soviet Union jailed refusniks. And Arab societies, nearly devoid of Jews, after having driven out well-established communities in the last century, are often taught that a tiny Jewish state — Israel — is the source of societal ills.

The anti-Semitism felt by the Fermis is an ancient and stubborn disease. If it is not fought relentlessly, anti-Semitism will build up in a society until it robs people of their humanity and future. It causes countries to wither and rot. And sometimes the repercussions can change the course of history.

To their credit, European leaders have made great strides toward ensuring the anti-Semitism that manifested itself in discarded leaders is never again given the chance to lead the world into darkness. They have done so by confronting the past, educating their populations and finding constructive ways to engage with Israel — home of the largest Jewish population in the world — through sport, culture, politics and business.

The results are impressive by any historic measure. Germany today is one of Israel’s greatest allies. Romania is following President Donald Trump’s lead and moving its embassy in Israel to Jerusalem. The Balkans, long a hotbed of anti-Semitism, now enjoys a growing number of leaders who see anti-Semitism for the danger that is it for the countries and their people. But serious challenges remain.

We see it in shootings outside of Jewish schools or inside a kosher supermarket in France. We hear it in the rhetoric of a potential British prime minister whose sentiment is so toxic that he has driven Jewish parliamentarians from his Labour party. We read about it in Polish newspapers delivered to the parliament in Warsaw with helpful tips on how to “spot a Jew.” And we feel it, on American streets, when the baby carriage of a Jewish family is kicked by bigots in New York and congregants are murdered in the sanctuary of their synagogue in Pittsburgh.

Hate should be confronted directly and I believe that the surest path toward real progress is found in stronger ties between Europe, which held Diaspora Jewry for centuries, and the Jewish state. Nonprofits like the European Leadership Network (ELNET), which I support, are doing the heavy lifting of bringing together like-minded leaders in Europe and Israel who value tolerance, democracy and religious freedom, but there is a role for individuals from all walks of life from every nation to play.

In America, we must continue to hold ourselves to the highest standards of equality. We have a duty to ensure that our youngest generation and everyone following learns the tragic lessons of where hatred can lead. We should expand opportunities for children to learn the history of anti-Semitism and the Holocaust and encourage schools to include it in their curricula. We should speak up against the nominally masked hate at the foundation of the Boycott, Divestment and Sanctions (BDS) movement. And we should demand more of our leaders, from Capitol Hill to Brussels and everywhere in between. America must lead because the rest of the world is watching.

America will always be Israel’s greatest ally, but Europe is the key to securing Israel’s long-term safety and security. Strong relationships on the continent help to ensure that the past cannot be repeated, secures Israel’s survival and protects the minority communities of the Diaspora.

Doing so is essential. There is no alternative, nor should there be one. And, to be clear, it is not realistic for any European leader to enjoy the confidence of his or her Jewish constituents without working hard to forge an unbreakable relationship with Israel. Nor are close relations with Jerusalem a zero-sum game that would leave Arab allies behind. Israel’s relationships with Arab neighbors has never been more fruitful than they are today.

Nobody wants to lose the next Fermi. No rational leader wants to add their name to history’s list of bigots and hatemongers. And no person is incapable of learning from others or creating stronger bonds that make everyone more capable and more secure.

Click here to read the original article at the Times of Israel.