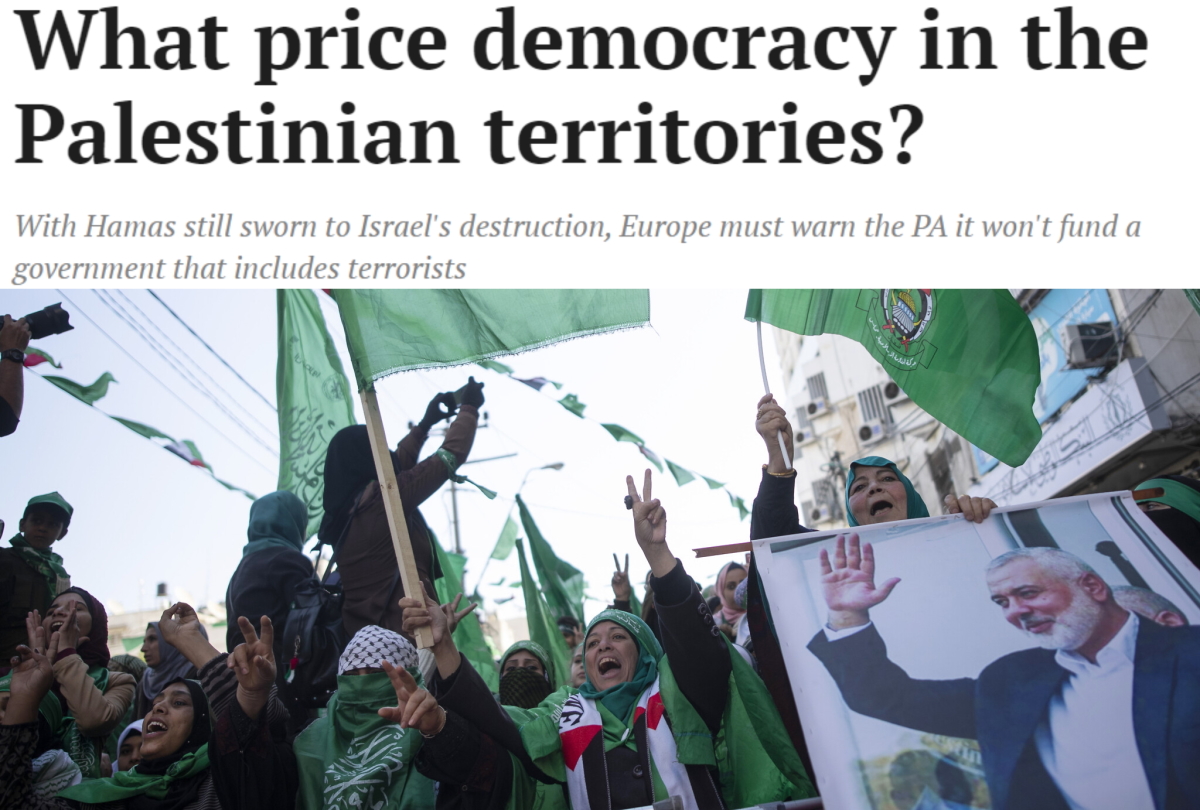 Op-Ed: Democracy in the Palestinian Territories, but at what cost?

View the original version of this op-ed, published in the Times of Israel.

Next month, for the first time in 15 years, the Palestinian people will finally have the long-coveted opportunity to hold democratic elections. They will potentially have the right to make the choices about who leads them, through free and fair elections. As any people, the Palestinians would expect their leaders to promise them and their families a good life, liberty and security, freedom of movement and belief. Yet the upcoming elections allow the participation of Hamas, an extremist, armed Islamist movement that does not in any means correlate with these very basic human rights and needs.

Hamas, openly committed to Israel’s destruction through violent means, has already proved this position with a long line of historical precedents, which purely contradict EU values and laws – and indeed, Hamas in its entirety was proscribed as a terrorist organization by the EU in 2003, a decision that has been upheld in a series of legal rulings. In 2006, Hamas participated in PA elections in contravention of stipulations in the Oslo Accords that exclude candidates that “pursue the implementation of their aims by unlawful or non-democratic means.”

Following the surprise of Hamas’s 2006 victory, the Quartet (the US, EU, UN and Russia) made clear that “all members of a future Palestinian Government must be committed to non-violence, recognition of Israel, and acceptance of previous agreements.” The formation of a Palestinian government in which Hamas played a dominant role severely compromised the ability of the EU and European governments to provide financial and development assistance to the PA. Moreover, Hamas’s electoral victory led to it violently taking over the Gaza Strip in 2007. The consequences of this event – an unresolved split in the PA and several devastating rounds of conflict between Hamas in the Gaza Strip and Israel – overshadow attempts to advance peace to this day.

The EU and European governments, in coordination with the United States and other international actors, should therefore convey a strong message to the PA at senior levels ahead of the elections. The Palestinian leadership should be clear that, while the Palestinian people are entitled to conduct their own domestic political processes as they see fit, the EU and European governments will not be able to conduct normal business with, and continue the same support for, a Palestinian government in which Hamas shares power, so long as its officials do not unequivocally renounce violence and recognize Israel. To do so would contradict the EU’s proscription of Hamas as a terrorist organization and European commitments to a peaceful resolution of the conflict based on a two-state solution.

In this context, it should be emphasized that recognizing Israel means accepting its permanence as part of a conflict-ending solution and not – as Hamas holds – a temporary arrangement on the way to Israel’s elimination. Furthermore, all members of a PA government should be expected to unequivocally renounce violence in all its forms; not only the use of rockets and bombs, but also so-called ‘popular resistance’, which includes lethal use of knives, vehicles, Molotov cocktails, rocks and more.

Democratic processes are at the core of European values and should be encouraged everywhere. At the same time, Europeans know from bitter experience that democracy must be protected from those that would abuse legitimate processes to advance radical, illiberal, and anti-democratic agendas. The only question is, what would Europe do to prevent this foretold reality?