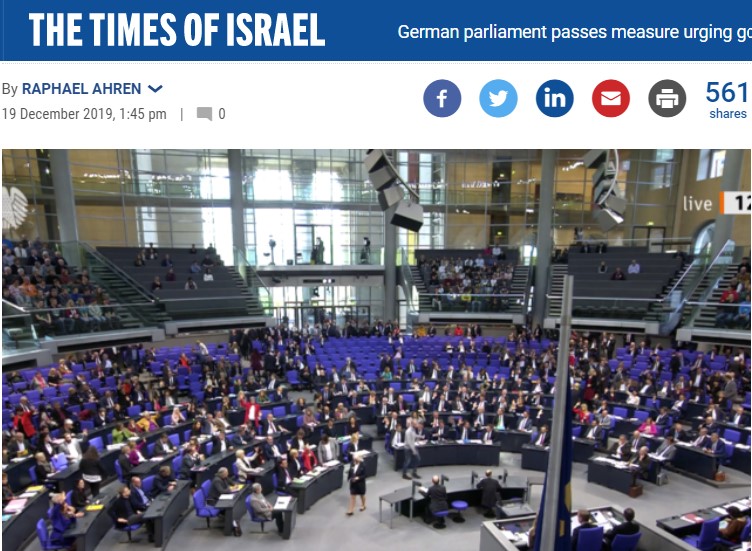 Times of Israel Quotes ELNET on the German Hezbollah Resolution

Article by Raphael Ahren, The Times of Israel

The German parliament on Thursday passed a resolution calling on the government in Berlin to outlaw activities of the Iranian-backed, Lebanese terrorist organization Hezbollah.

The nonbinding motion was supported by the two major parties that make up Germany’s ruling coalition, as well as by a small opposition party called FDP, thus passing with a large majority. The other three parties in the Bundestag abstained. No one voted against the resolution.

During the debate some critics noted the resolution was effectively less than a ban of the organization.

The resolution that passed called on the government to “decree an activity ban against Hezbollah in order not to tolerate any activity in Germany by representatives of the organization, which opposes the principle of international understanding.”

It further urges Berlin to abandon the distinction it currently draws between a political and a military wing of Hezbollah. (…)

The motion’s passing was welcomed by ELNET, a nonprofit dedicated to strengthening Europe-Israel relations.

“The resolution is an important milestone in safeguarding Jewish life in Germany, fighting extremism and anti-Semitism, while ensuring Israel’s security and countering terrorism,” the group said in a statement. “The large majority which adopted this resolution sends a strong message of resolve against Hezbollah and Iran’s aggression.”

Click here to read the original article in the Times of Israel.