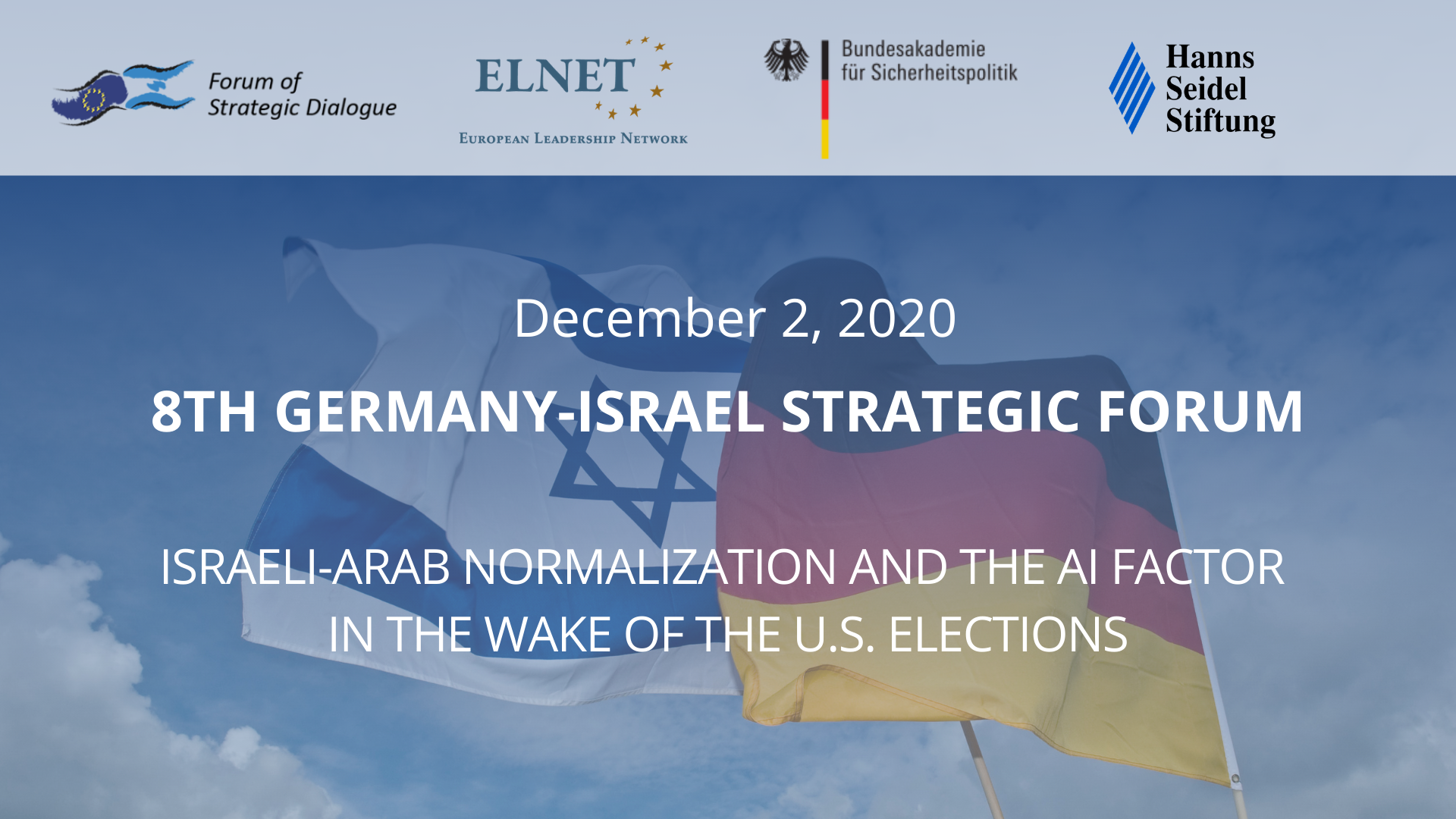 On December 2, ELNET-Germany and the Forum of Strategic Dialogue (FSD) hosted the Eighth German-Israeli Strategic Forum. Due to the ongoing pandemic, the event took place virtually this year. Organized in collaboration with the Federal Academy for Security Policy (BAKS), this conference creates a forum for annual debate for key decision-makers from politics, administration, and research from both Germany and Israel. For the first time, the Hanns Seidel Foundation (HSS) joined as an additional partner. The forum’s confidential atmosphere facilitates networking as well as open and at times controversial discussions, complementing official channels.

The eighth edition of the dialogue focused on two important and increasingly complex issues that both Germany and Israel face. A first panel concentrated on Israeli-Arab diplomatic normalization and its impact on the Israeli-Palestinian conflict. On the second panel, the participants discussed the geopolitical implications of new developments and trends in artificial intelligence (AI).

To provide a common basis for discussion and food for thought – Professor Gisela Dachs and Dr Ulrike Franke, under the aegis of the HSS, prepared short discussion papers for both panels, and our partners from the FSD drafted short responses to these impulses, portraying Israeli points of view.

The first panel discussed a large number of questions surrounding the regional repercussions of the normalization process. Here, the Israeli-Palestinian conflict emerged as one that is intricately linked to larger developments. The question of how this positive dynamic could be translated into the Israeli-Palestinian peace process was central to the discussion. Whether changing circumstances mean that approaches to solve the conflict have to be reconsidered more fundamentally was subject to an animated debate.

Participants on the second panel agreed that AI will and already has transformed international relations and security policy. Different opinions were expressed on the state of Western efforts vis-à-vis Chinese activities and a possible divergence in capabilities between authoritarian and democratic states in military AI. Several perspectives on whether pessimism is warranted with respect to the prospect for international AI weapons control mechanisms were aired. The debate also touched on the dimension of public funding required for the development of competitive AI technologies.

The conference profited from a diverse range of participants from various backgrounds. Participants included senior officials from the ministries of Foreign Affairs and Defense, the Israel Defense Forces (IDF), politicians, as well as former officials, experts, academics and journalists from Germany and Israel.

The location of the event alternates between Berlin and Jerusalem on an annual basis. While last year’s conference took place in Germany, the Ninth German-Israeli Strategic Forum will return to Jerusalem at the end of 2021.