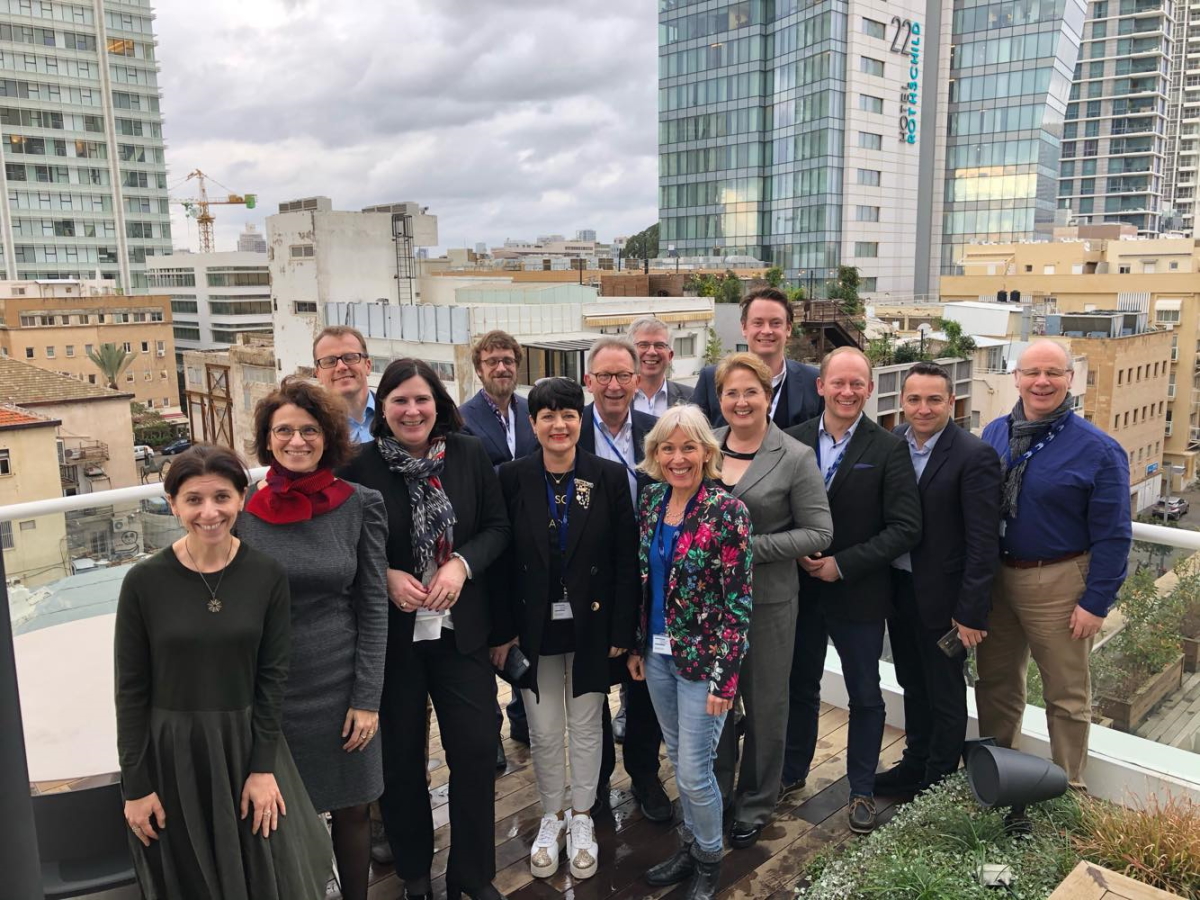 From January 18-22, ELNET-Germany invited seven Members of the German Bundestag and two experts from the German innovative health sector to Israel to learn more about current challenges and innovative developments in Israel’s health and pharmaceutical sector. The delegation was led by the chairman of the Committee on Health in the German Bundestag, MP Erwin Rüddel, and comprised four members of the Christian Democratic Union (CDU), one from the Social Democrats (SPD), and two from the Liberal Party (FDP).

The journey started with an exclusive insight into the IDF’s humanitarian aid efforts and its quick disaster relief response program presented by Dr. Brig. Gen. Tarif Bader, Medical Corp Commander of the IDF. During a subsequent visit to Save a Child’s Heart, an Israeli humanitarian charity based at the Wolfson Medical Center, the delegation learned about the organization’s efforts to provide life-saving heart treatment to children from developing countries and the Palestinian territories. Similarly, during a visit to the headquarters of MADA, the medical and emergency service for Israel, the group was briefed on the services provided by the organization, its innovative use of apps to provide aid in cases of emergency, their fast response time, and the incredible support of thousands of volunteers engaged in the work of MADA. The delegation especially enjoyed visiting the service center where the MADA-staff handles emergency calls.

Afterwards, the delegation explored Sanara Ventures, a Philips and Teva Innovation Hub, where they learned about cutting-edge developments in Israel’s pharmaceutical sector and future possibilities to treat different diseases. The delegation was able to discuss what they learnt with Mati Gill, Head of Government Affairs and Policy for Teva Growth Markets at Teva Pharmaceutical Industries.

During a private briefing with Member of Knesset Sharren Haskel (Likud), the delegation discussed the difficult coalition-building process in Israel and the perspective of a new round of elections coming up in March. Apart from the elections, the discussions with MK Haskel focused on the use of medical cannabis for pain relief.

A dinner with Prof. Itamar Grotto, Vice President of the Ministry of Health in Israel, concluded the first full day of appointments in Israel. The delegation was visibly honored to receive such a high-ranking guest and was eager to discuss similarities and differences between the Israeli and German health system and what could and should be learned from Israel to be applied in Germany.

The following day put Israel’s startup ecosystem at its front and centre. The delegation travelled to the headquarters of Start-Up Nation Central where they were exposed to a great variety of briefings and presentations about the innovative economy in Israel. Speakers included Maya Cohn Adulamy, COO of Maccabi Research and Innovation Institute (Maccabitech), who talked about data-driven innovation in daily practice at HMOs to the delegation, as well as Esti Shelly, Director for Digital Health at the Israeli Ministry of Health innovation. The delegation then enjoyed innovation showcases of various Israeli startups in the digital health sector, including Syqe Medical, eWave, iMDsoft, and Medical EarlySign.

Venturing on to Jerusalem, the delegation had the rare opportunity to meet with Member of Knesset and former mayor of Jerusalem, Nir Barkat (Likud). The group was thrilled to learn more about Jerusalem and its distinct history and current challenges. Expanding their view away from Jerusalem to Israel and the region as a whole, the delegates down with Amb. Avi Nir-Feldklein, Head of Bureau for the Europe Division, and Rachel Feinmesser, Head of International Affairs Bureau at the Center for Policy Research, and asked questions about threats to Israel’s security, the role of Iran, and the current protests against its regime. The talks also revolved around German-Israeli relations, specifically around possible future projects to further strengthen the bonds between Germany and Israel without shying away from addressing problems in the relationship.

One week before the International Holocaust Remembrance Day, the delegation went on a guided tour through the holocaust memorial Yad Vashem and laid down a wreath in remembrance of the victims of the Shoa. The delegation perceived this to be a very emotional but nonetheless essential part of the program. A highlight of the trip for many of the participants was the subsequent reception by the Goldberg family, where Holocaust survivor Hillel Goldberg welcomed the delegation to remember his past in Germany and Poland. The group was astounded by the openness and hospitality of their hosts. After some time of intensive discussions, the group stayed well into the night, chatting with the Goldberg family and fostering personal bonds.