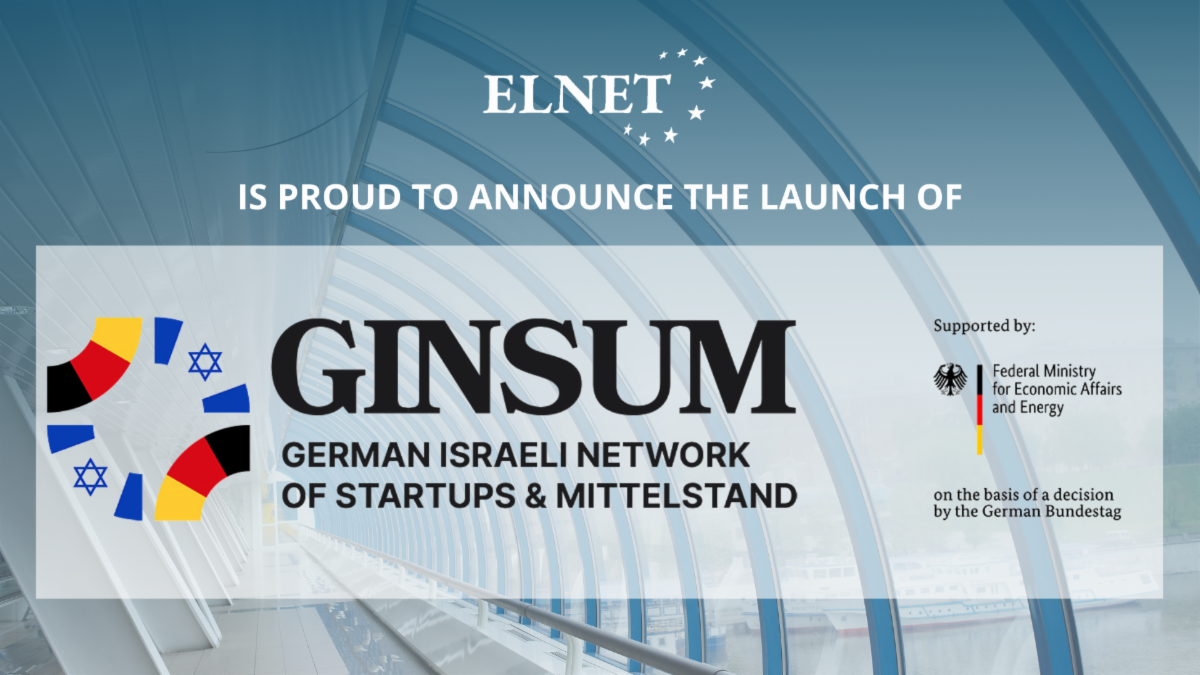 ELNET Launches New Initiative to Bring Israeli Innovation to Germany, With Support of the German Government

In the 55th year of German-Israeli diplomatic relations, ELNET-Germany launches the German Israeli Network of Startups and Mittelstand (GINSUM). The two-year program, funded with a first-of-a-kind grant of more than NIS 2,7mln ($850,000) by the German Federal Ministry for Economic Affairs and Energy (BMWi), aims to connect Israeli startups with German medium-sized companies. Start-up Nation Central, a non-profit building bridges to Israeli innovation, is the senior partner of the project in Israel.

Cooperation between Israeli startups & German Mittelstand in the context of digitalization

According to a study by Bitkom, at present, the majority of German medium-sized companies rate their own level of digitalization as just satisfactory. Only every third company has its own central digitization strategy. GINSUM aims to reduce existing deficits in the area of ​​digitization in Germany by bringing in Israeli innovation. In the context of digitalization and related areas such as Digital Health, Cyber Security, GreenTech or Safe and Smart City, Israel is excellently positioned and offers highly qualified talents as well as innovative products and solutions. On the other hand, the German “Mittelstand” includes thousands of hidden champions, Europan and international market leaders in their respective fields, mostly family-owned and in excellent financial shape.

The study “German and Israeli Innovation – The Best of Two Worlds” by Bertelsmann Foundation, Partner of GINSUM, has identified three central obstacles to successful cooperation between Israeli startups and the German Mittelstand: a lack of market access, a lack of transparency with regard to relevant market players and a lack of internal resources to find the right partner. As an independent and neutral platform, GINSUM is expressly dedicated to these aspects and, with experienced German and Israeli partners at its side, offers ideal conditions to meet the challenges mentioned in the long term.

Start-up Nation Central, which will join forces with ELNET to facilitate GINSUM delegations and exchanges, brings to the project years of expertise on Israel’s innovation ecosystem, and experience in connecting it with German business and government leaders. A recent report by the organization shows that despite the pandemic, 2020 will be a record year in terms of capital raised by Israeli start-ups with 10B $ demonstrating the global potential of Israeli innovation.

Together with these partners, ELNET plans to organize various exchange formats such as roadshows, pitch events and workshops to support the establishment of Israeli startups in Germany in addition to cooperation between Israeli startups, medium-sized companies and municipal actors. In addition, i.a. Studies in the context of German-Israeli innovations and an online-network-platform are planned.

Thomas Jarzombek, Member of the German Bundestag, Federal Government Coordinator of German Aerospace Policy, Commissioner of the Federal Ministry for Economic Affairs and Energy for the Digital Industry and Start-ups, very much welcomes the initiative: “Start-ups are innovative and disruptive – and therefore an important factor for the entire economy. Exchange with other founders and access to new markets are key to their success. I am therefore very pleased that ELNET is creating an important platform with GINSUM for connecting the German and Israeli startup ecosystems. Innovations from Israel can especially advance German medium-sized companies and the connection offers growth opportunities for both sides. To realize the potential of the cooperation, we support GINSUM not only in words, but also financially and look forward to a successful cooperation.”

Carsten Ovens, ELNET’s Executive Director and initiator of GINSUM:  “With the Israeli startup scene and German medium-sized companies, GINSUM will bring the best of two worlds together. Over 6,000 innovative Israeli startups offer extensive opportunities, especially in the context of GreenTech and Safe and Smart City. Both countries can benefit from closer cooperation and strengthen their economic systems. ELNET has many years of experience in European-Israeli cooperation as well as a comprehensive network in business and politics.”

Jeremie Kletzkine, VP Business Development atStart-Up Nation Central: “Startup Nation Central has been developing projects around Mittelstands in Germany in the last three years- with multipul entities around the country. We are extremely honored to join what we believe is an extremely productive venture, which will enable both ecosystems to move to the next level in terms of collaborations and value co-creation.”

With the support of GINSUM, the German government is implementing its coalition agreement goals to further expand the cooperation between startups and established businesses as well as to promote international startup exchange. GINSUM builds on the German Israeli Startup Exchange Program (GISEP), which was part of the German Startups Association for more than three years. The Startups Association continues to support GINSUM as a network partner.