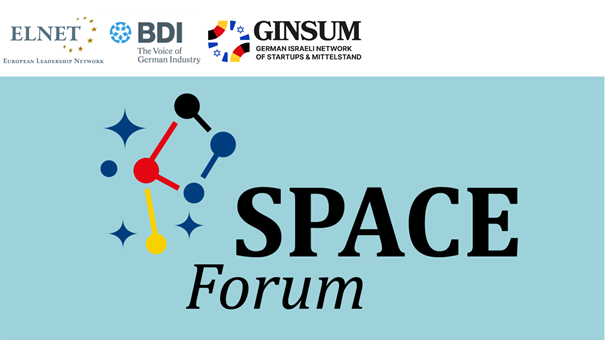 The rapid development of the private NewSpace industry, especially in the United States, and the ever-increasing number of associated applications on earth are moving more and more into the focus of politics and business. For decades, the space industry has been one of the most influential drivers of innovation in many other areas, such as materials and climate research, the use of regenerative energies, and the development of accumulators.

International cooperation in this area can create significant synergies. Cooperation in space also arouses enthusiasm and offers an excellent opportunity to deepen international relations and strengthen mutual trust. Israel, a space nation since 1988, has already impressively demonstrated its extraordinary capabilities in this area. Particularly in the construction of compact and light satellites, the country has developed particular competencies due to geographical and geopolitical conditions.

To promote international cooperation, ELNET Germany and the Federation of German Industries (BDI) organized the first German Israeli Space Forum, which took place virtually on June 2, 2021. The introductory statements were given by Thomas Jarzombek MP, Federal Government Coordinator for Aerospace and Commissioner for the Digital Economy and Startups of the Federal Ministry for Economy and Energy of Germany, and Prof. Isaac Ben-Israel, Chairman of the Israeli Space Agency, and the Israel National Council for Research Development. Afterwards, possibilities of cooperation and state support for the space economy were discussed on two panels.

There was consensus that the cooperation between the industrial nation Germany and the startup nation Israel offers immense potential in space. While Israel tends not to overstate risks unnecessarily and seize opportunities quickly, Germany has the industrial capacity to rapidly implement and scale highly complex technical solutions and offers ideal cooperation opportunities for NewSpace companies and businesses from other industrial sectors.

The topic of financing was of great relevance throughout the discussion. High investment costs combined with high risk are a major entry barrier for young companies. Although the presented “NewSpace Industry Report Germany 2020” shows an immense increase in private investments, government contracts remain indispensable for a flourishing NewSpace ecosystem.

Young companies in this field can also be supported by providing technical and scientific infrastructure. Thanks to the Israel Innovation Authority activities, Israel is also exemplary in the area of NewSpace. As part of the joint use of state institutions, young companies can network and thus develop further synergies. It was found that in Germany, there is, above all, a need for more flexible and accessible financing options.

The exchange between government agencies and companies must also be facilitated to implement new ideas faster and better. The application-oriented space industry, in particular, has immense potential, which should be tapped, for example, with government anchor orders. Governments should primarily buy services from NewSpace companies instead of promoting technology. The use of satellite data to cope with major societal challenges such as climate change and everyday challenges would show people the concrete benefits of government space investments and thus increase their acceptance.

International cooperation represents another important channel for additional funding in the space sector. Joint missions such as the development and operation of a joint research satellite would offer companies a good and, due to the partly shared costs and risks, favorable opportunity to apply their technologies and test. The launch platform for small launch vehicles in the German North Sea, which is currently being planned, also offers the chance of shared use, e.g., by Israeli launch vehicle manufacturers. Mutual interest was already evident during the event. A joint German Israeli moon mission would be an additional opportunity that is already being promoted by companies such as OHB from Bremen and Israel Aerospace Industries. The state-level should follow suit and officially initiate a joint mission.

The fact that Professor Ben-Israel gave his keynote address from the United Arab Emirates, where he is currently talking about a joint Israeli-Arab lunar program, shows that Israel is actively looking for partners. Israel’s plan to bring two landers to the moon at the same time provides an excellent framework for developing and trying out new and innovative solutions together. Support from the European Space Agency (ESA) would be desirable. This could even be the first step towards Israel’s full membership in the ESA.

In international cooperation and the development of new applications, private actors depend on a clear legal framework. These framework conditions should encourage companies to approach each other and implement joint projects. The EU Commission’s proposal to exclude Israel from the Horizon Europe research program in space and quantum computing runs counter to this and should therefore be corrected. The German federal government and other European countries have already spoken out in favor of Israel’s full inclusion.

PrevPreviousTackling the Climate Crisis With Green Hydrogen
NextJoin us for the German Israeli Health Forum for Artificial Intelligence, Oct 28!Next