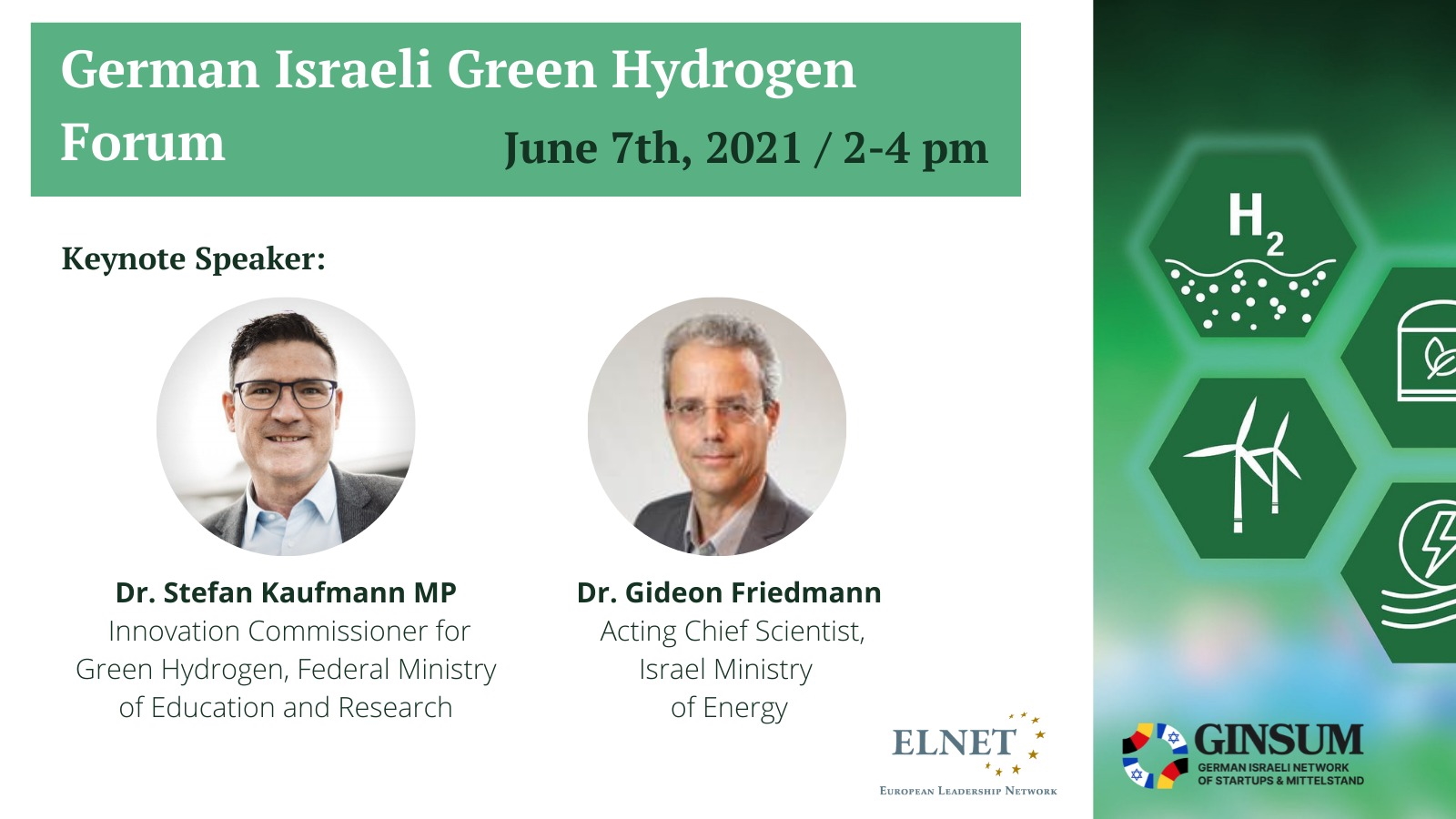 Green hydrogen will play a central role in the decarbonization of the European economy. Particularly in the areas of transportation, energy-intensive production and heating, hydrogen is expected to replace existing fossil fuels due to its good transportability and versatile uses. The European Union has already set an initial framework for this with its hydrogen strategy. This has been taken into account by several member states, including Germany, while developing their own approach.

The importance of green hydrogen is also increasingly recognized outside of Europe. Israel, for example, has assigned this energy carrier a central role: the national strategy “Israel 2050” foresees a reduction of CO2 emissions by 80 percent, which can be achieved by using hydrogen.

Germany and Israel already cooperate closely in the field of innovation and are interconnected in many ways. It, therefore, seems logical to meet the challenges posed by climate change together as well. Cooperation between Germany as a pioneer of the energy transition and the sunny startup nation of Israel offers many opportunities in this regard. While Israel has a favorable geographic location and immense innovation potential, Germany has unique experience in renewable energy and the industrial capacity to implement and scale highly complex technical solutions.

With this background, ELNET Germany organized the first German Israeli Green Hydrogen Forum. The event started with keynote speeches by Dr. Stefan Kaufmann MP, Innovation Officer for Green Hydrogen at the German Federal Ministry of Education and Research and Dr. Gideon Friedmann, Acting Chief Scientist at the Israeli Ministry of Energy. Afterward, two high-profile panels discussed similarities and differences in the approaches of the two countries as well as various opportunities to cooperate.

Green hydrogen can play a central role in tackling the emerging climate crisis. The participants agreed that Germany does not have the capacity to produce the required quantities of hydrogen itself and will therefore have to rely on energy imports. However, Israel’s function in this context could not only be that of a supplier, but above all that of a technology partner. Israel already has extensive experience whether in desalinating seawater to conserve scarce freshwater reserves or in digitally securing generation and transport networks. On the other hand, the use of renewable energies is less pronounced in Israel than in Germany. The Israeli power grid still needs to be adapted and modernized for this purpose. This in turn offers German companies opportunities and possibilities.

During the event, it was also argued that the cost of producing and transporting green hydrogen would have to be significantly reduced for its use to become economically viable. Bilateral projects could aim at this and thus further advance technology transfer, while national solo efforts would be avoided.

To fully exploit the potential of green hydrogen, a holistic approach is necessary. Production, storage, transport and use must not be considered separately. Current projects, such as the gas pipeline from Israel to Europe, should be designed from the outset so that they can also be used for hydrogen. Close intergovernmental coordination and appropriate regulation and funding are required.

You can watch the event here: