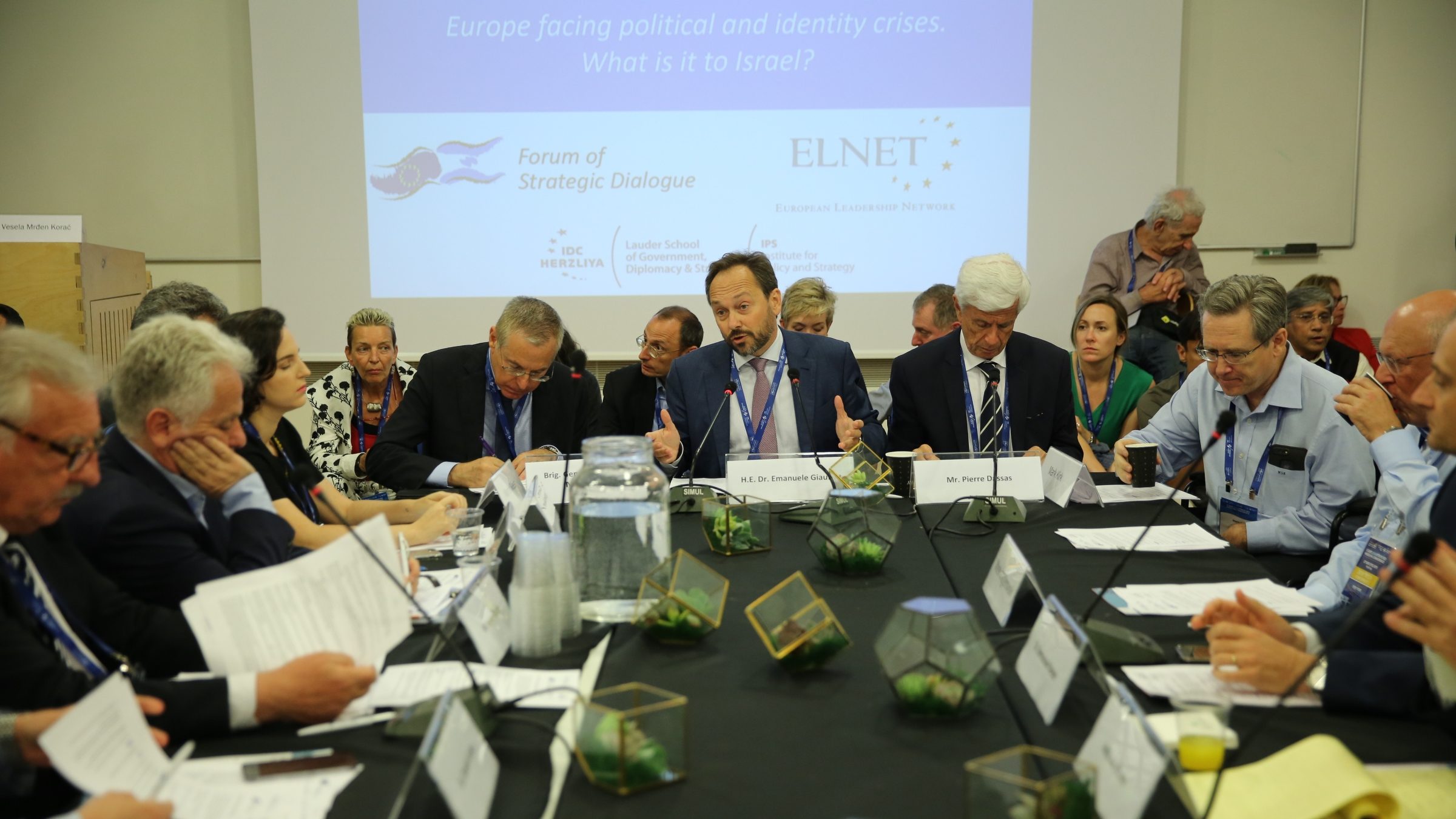 For the sixth consecutive year, the European Leadership Network (ELNET) and the Forum of Strategic Dialogue (FSD) hosted a special Roundtable session entitled “Europe facing political and identity crises. What is it to Israel?” at the prestigious 19th Herzliya Conference, in partnership with the Interdisciplinary Center (IDC) Herzliya.

The Herzliya Conference is one of Israel’s foremost annual policy gatherings. It draws Israeli and international participants from high levels of government, policy, business, and academic circles to address pressing national, regional and global issues.

The ELNET Roundtable session featured 12 carefully selected speakers from across Europe, the US, and Israel, and attracted around 90 figures involved in the European-Israeli arena. It garnered the highest attendance to date in ELNET’s roundtables and was the best attended of all the roundtables at the Conference. The impressive group of speakers included Amb. Dr. Emanuele Giaufret, Head, Delegation of European Union to the State of Israel; Dr. Kenneth R. Weinstein, President and Chief Executive Officer, Hudson Institute; Amb. Avi Pazner, former Israeli Ambassador to France and Italy; and Ariel Shafransky, Director, Multilateral European Organizations Department, Europe Division, Israel’s Ministry of Foreign Affairs (MFA). The Roundtable attracted the ambassadors of France, Poland, Sweden, Denmark, Austria, Hungary, and Croatia.

A delegation of German and French journalists hosted by ELNET also attended the Roundtable.

In the first part of the Roundtable, speakers shared their analysis of the political and identity crises challenging Europe. Today’s liberal democracies in Europe are under pressure. We witness a rise of nationalism, populism, and illiberalism, often portraying racist, xenophobic or antisemitic undertones, both on the right and the left. These trends are fueled among other things by economic and migration pressures. All over Europe, traditional parties are losing ground. French President Macron redefined the traditional right and left in France, and has been holding “the great debate,” namely town-hall-style meetings throughout the country, in response to the yellow vest protest movement. In Germany, the far-right Alternative for Germany (AfD), has become a gamechanger in federal and state politics. The UK is on the verge of Brexiting and challenged by antisemitism, especially in the Labor party. At the EU level, the recent Parliament elections saw a rise of liberals and greens, as well as of populists, although less than predicted.

In the second part of the Roundtable, speakers presented their outlook on the implications for Israel.