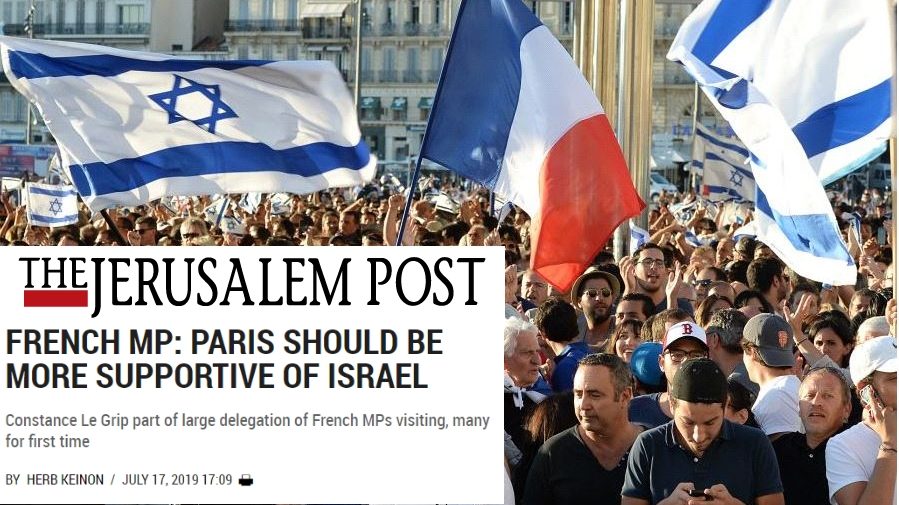 French MP: Paris Should be More Supportive of Israel

“France should be “more courageous” in its foreign policy and “more capable” of identifying its true friends in the region, French parliamentarian Constance Le Grip, formerly an adviser to then French President Francois Sarkozy, said on Wednesday.

Le Grip, a member of The Republicans who acknowledged that as a member of the opposition in the French parliament it easy to be critical, said Paris should be more clear on”what we want, and which countries we support.”

“I would like my country to be more supportive of Israeli democracy, and on some issues not be so naive,” she said. “It sounds bizarre to say that President {Emmanuel] Macron and the Fench government can be naive on some issues, but – nevertheless – on some issues I am not sure that trying to be totally balanced allows you to be understood, listened and effective.”

Le Grip is part of the largest-ever French parliamentary delegation – made up of some 35 members –, currently visiting Israel for four days on a trip sponsored by ELNET, an NGO dedicated to strengthening Europe-Israel relations. The delegation spans the political spectrum in France, except for the far-Left and far-Right. For most people this is their first trip to Israel.

Speaking at the cafeteria in Yad Vashem, before going with the delegation to a meeting with Prime Minister Benjamin Netanyahu, Le Grip took issue with her country – and even much of her party’s – position on the Iranian nuclear deal. “I would like France to be clear on some issues, such as our attitude vis-a-vis Iran,” she said. “I didn’t consider that the nuclear agreement was good – I was very skeptical of the agreement.”

Le Grip, who has been to Israel before, represents a district in Paris and is an active member of a study group in the National Assembly on antisemitism. Asked whether she thought Jews were safe in France, she replied, “Jews are safe, but are facing more and more antisemitism. I know there is a huge rise in antisemitism– there was a 74% rise last year, and this is absolutely unacceptable.”

Asked to explain the rise, she attributed it largely to the demographic changes in the country and a media that does not present a nuanced picture of the conflict here.

“The French population has changed in many parts of the country, especially in the Paris region,” she said. “We know exactly why Jewish families have to leave their homes –they are doing their aliya toward Israel, but for a few years now we have had an ‘internal aliya’ – more and more Jewish families living east of the Parisian regions and going to the west, where I live, hoping they will be more secure, because their kids have problems in school.”

Asked if by saying that the French population has changed she was referring to Muslim immigration, she replied: “It is not politically correct to say  that, but there has been a change in the population in a big city like Paris, and the Paris region. It is one of the explanations.”

Another explanation, she said, is “a lack of real information about what is happening here,” and the threats against Israel.

“I’m sorry to say some French journalists are lazy about international affairs and issues that are always complicated and difficult, and need a lot of work to try to understand,” she said.

Too often, she asserted,, information about Israel in the traditional media is “too simple,” and that a “lack” of historical context.distorts the picture emerging from Israel and “might be another explanation” for the antisemitism.

For Thierry Michels, a parliamentarian from Strasbourg representing Macron’s LREM  party, this is his first trip to Israel.

He said that his region, which suffered tremendously during World War II, strongly believes in the need for cooperation and in the European project that led from two world wars to the European Union.

“When I come here and hear the challenges you face in the region, I say, ‘Wow, sometimes this will happen in the region, because ordinary people just want to go on with their lives – settle down, have projects and raise families.”

When reminded that t Europe was only able to go from World War II to cooperation after Nazi Germany was completely eradicated, Michels acknowledged the differences but said, “You still need to have that vision.”