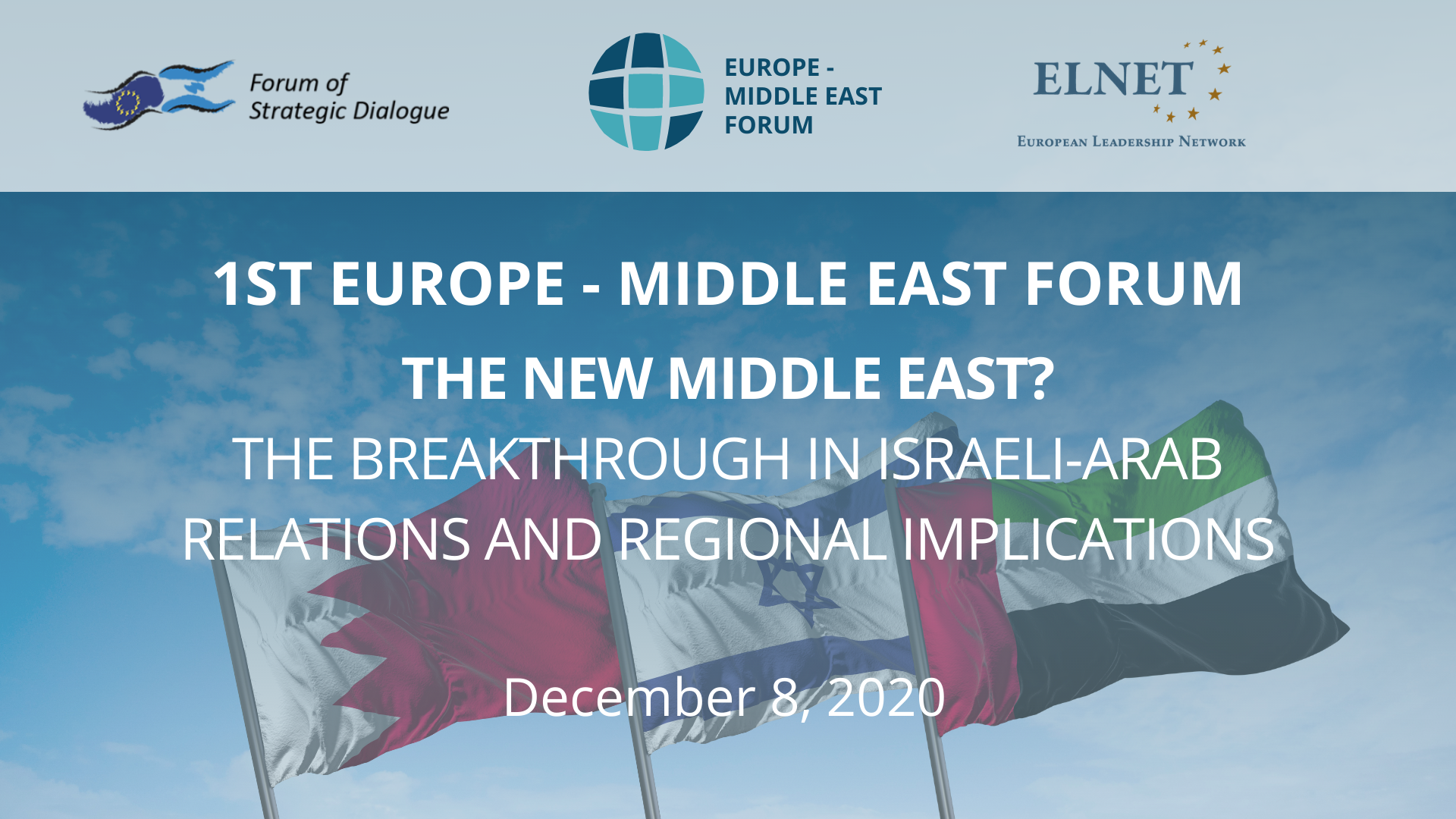 New Forum Brings Together Leaders from Across the Middle East, Europe & the U.S.

The recent breakthrough in Israeli-Arab relations opens new opportunities that require a multilateral dialogue involving Europeans, Middle Easterners, and Americans regarding the potential impact of this important development. To that end, earlier this month ELNET and the Forum of Strategic Dialogue (FSD) hosted the first-ever Europe-Middle East Forum with senior policymakers and experts from four European and six Middle East countries, as well as from the EU, the UN, and the U.S., to discuss the topic: “Are we in a new Middle East?”

The idea behind the Forum is to expand the existing bilateral Israeli-European dialogues in order to take stock of the recent breakthrough to Israeli-Arab normalization, generate a discussion of its potential repercussions among the relevant regional and external stakeholders, and encourage Europe to actively align itself with the new realities in the Middle East.

MEP Antonio López-Istúriz White, Secretary-General of the European Peoples Party in the European Parliament, and Manuel Valls, former Prime Minister of France opened the Forum by discussing the Abraham Accords and the role of Europe in building further bridges to and in the region. MEP López-Istúriz White praised the launch of the forum, noting that the Abraham Accords “mark the beginning of the end for old narratives,” and stating that “the EU should take a more prominent role contributing to long-term solutions in the region.” His appeal for the EU to rethink its role in the Middle East in the context of the agreements was published following the forum in an op-ed in a European media network, Euractive.

“Taking part in the Europe – Middle East Forum, I felt like I had a ‘front-row seat’ witnessing history.”

The forum covered two topics: the potential impact of the breakthrough in Israeli-Arab relations on the Israeli-Palestinian conflict in particular and on the region in general. The normalization agreements represent a historic breakthrough with significant potential impact on the Middle East in view of the participants. Behind these agreements stands a structural shift in the region. Having experienced acute geopolitical and socio-economic crises, regional actors attach higher priority to their national interests rather than subjecting them to a traditional Palestinian veto. They increasingly view Israel as part of the solution, even more so given the general feeling that the U.S. is in a mode of scaling down its footprint in the region.

Geopolitically, some participants argued that the region has come under strong destabilizing pressures from actors (Iran and Turkey) that strive to revive their past glory and hegemony as empires and from extreme, violent Islamists. Against this background, it took one bold actor – the UAE – to break the ice towards normalization and signal the way to others. Unlike Israel’s previous peace agreements with Egypt and Jordan, the normalization agreements with the UAE are fast translating into a warm peace. One important outcome of this whole process is that Arabs and Israelis can now speak to each other much more openly.

There was a broad consensus that in order to make the best out of this process for the region and for Israelis and Palestinians, U.S. leadership is required. While the Middle East is not going to be a high priority for the new administration, in participants’ assessment the Biden team supports the trend of Israeli-Arab normalization and would like to take it to another level. However, the Biden administration will need to conceptualize incentives for different countries in moving forward.

Participants discussed the European role in the Israeli-Arab normalization process, with some arguing that Europe has been, by and large, quite marginal in this whole picture. It seems to lack a clear vision for the region and for its own role in it. Several participants characterized European attitudes as being behind the curve. While Europeans generally laud the Abraham Accords, they are more reserved about the potential impact of the breakthrough on the region as a whole and are highly concerned lest it further marginalize the Israeli-Palestinian conflict. Some Arab and Israeli participants called on Europe to place itself more in-tune with regional developments and play a bigger role, which requires working together with local actors and the U.S. The discussions indicate that regional actors and Europe need to focus on a broader response to shared threats or risks such as Iran and its proxies as well as extreme Islamism and terrorism.

On Iran, participants noted that the U.S., Europe, Arab countries and Israel share the strategic objective of blocking Iran’s ambitions in both the nuclear and the regional fields and that they should address these ambitions in a concerted manner.

There was a broad consensus that the Israeli-Arab normalization should be viewed as providing an opportunity also for Israeli-Palestinian relations. Arab countries that have relations with Israel are better positioned to engage both parties, open space for them and impact them. They and others in the region could apply “positive pressure,” for example by offering both sides political and economic incentives in the context of expanding normalization. It was also argued that regional actors could and should be incentivized to play a role in the Israeli-Palestinian context. Europe can be part of a new effort to achieve progress on the Israeli-Palestinian track. It was suggested that if Europe wants to play an effective role in this context, it should do it also through the process of Israeli-Arab normalization and by adopting a flexible approach that does not focus at this point on getting the parties to the negotiation table (a move likely to yield unfavorable results), but rather gives room for incremental, partial and interim advances.

The Europe-Middle East Forum provided an important new platform for an open discussion involving regional (Israelis and Arabs) and international (Europeans and Americans) stakeholders, exploring how all of them could work together to make the best out of the Israeli-Arab normalization process in the new, Biden era.

PrevPreviousEuropean Diplomats on a Strategic Tour at Israel’s Border with Gaza
NextCan the UK and Europe play an effective role in the changing Middle East?Next