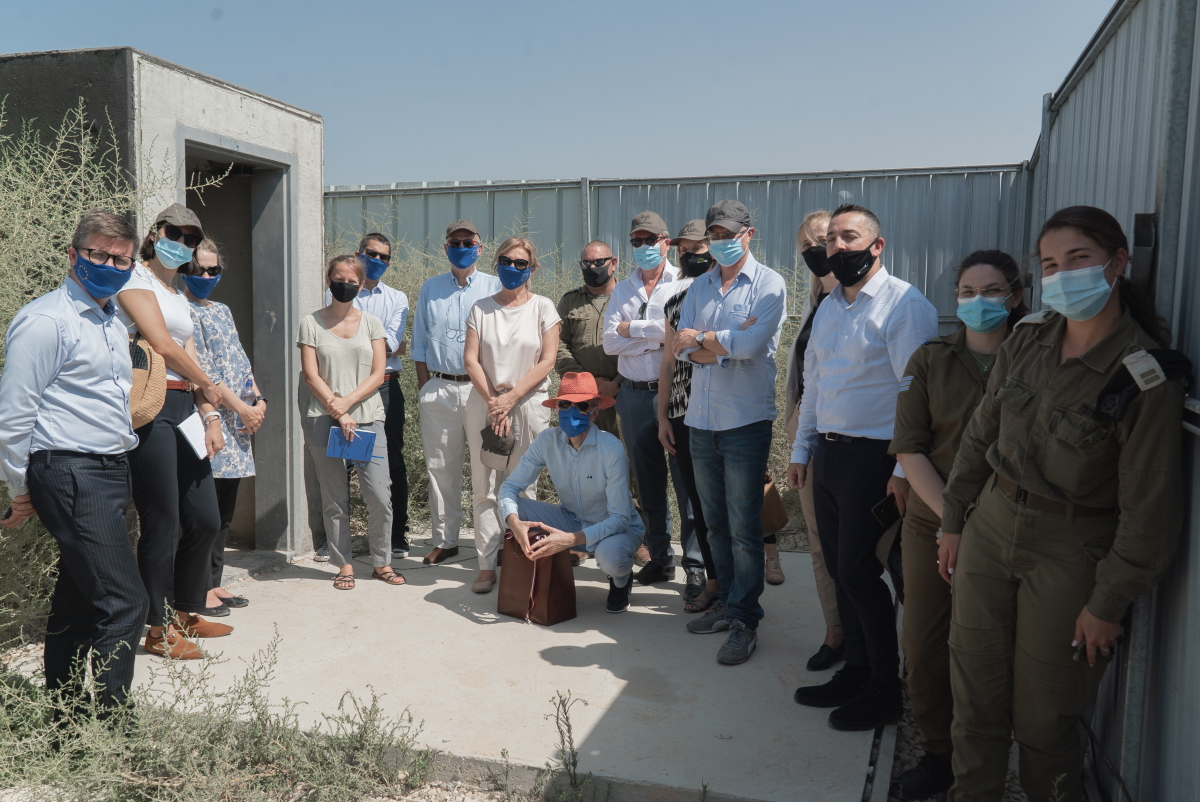 While official delegations from Europe are precluded from visiting Israel due to COVID-19 travel restrictions, European diplomats stationed in Israel increasingly serve as the only “eyes on the ground,” reporting directly to their capitals. Recognizing this new reality, ELNET launched a series of tailored strategic tours and programs for European ambassadors and senior embassy officials stationed in Israel.

Shortly before the new coronavirus restrictions have been announced in Israel, ELNET hosted 14 European ambassadors and senior diplomats on a first strategic tour of Israel’s border with Gaza. The program included key briefings with top Israel Defense Forces (IDF) officials on the border, a tour of the Kerem Shalom border crossing, and meetings with adjacent border communities. The program, organized in cooperation with the IDF, Israel’s Ministry of Foreign Affairs, and the European Union Delegation in Israel, provided the diplomats with a unique opportunity to experience first-hand the complexities facing Israel on the ground. The visit took place a day before yet another round of rocket fire from Gaza targeting the very communities visited during the trip.

The strategic tour began with a special briefing at the Kerem Shalom border crossing into Gaza. The Kerem Shalom terminal is the only border crossing facilitating the entry of goods into Gaza from the outside world. The participants toured the terminal with the director of the crossing and witnessed first-hand the transfer of trucks delivering goods including food and medical supplies to the Gaza population. The visit provided a unique opportunity for the ambassadors, many touring the site for the first time, to discuss common misconceptions regarding Israel’s humanitarian policy towards Gaza, which continues without limitations despite current conditions.

The visit was followed by an intelligence briefing at a border observation point and a tour of a Hamas terror tunnel recently detected and disabled by the IDF, which extended 2.3 km into Israeli territory, threatening the population of a nearby kibbutz. The delegation also met with Israeli civilians living in a community adjacent to the Gaza border. The European diplomats heard personal stories about the harsh realities of daily life in Israeli border communities.

The program concluded with a series of high-level briefings on the security challenges at the IDF headquarters in Tel Aviv, as well as a meeting with the General Commander of the Southern Command, Major General Hertzi Halevi, who provided a strategic overview of the challenges witnessed by the diplomats earlier that day. The meeting was also an opportunity to discuss Europe’s potential role in supporting the search for solutions to the situation in Gaza, including the need for decisive diplomatic efforts and pressure on Hamas.

This program was made possible by the generous support of the Genesis Foundation.

PrevPreviousResolution by the German Bundestag Promotes Peace, Security, and Stability in the Middle East
NextNew Forum Brings Together Leaders from Across the Middle East, Europe & the U.S.Next