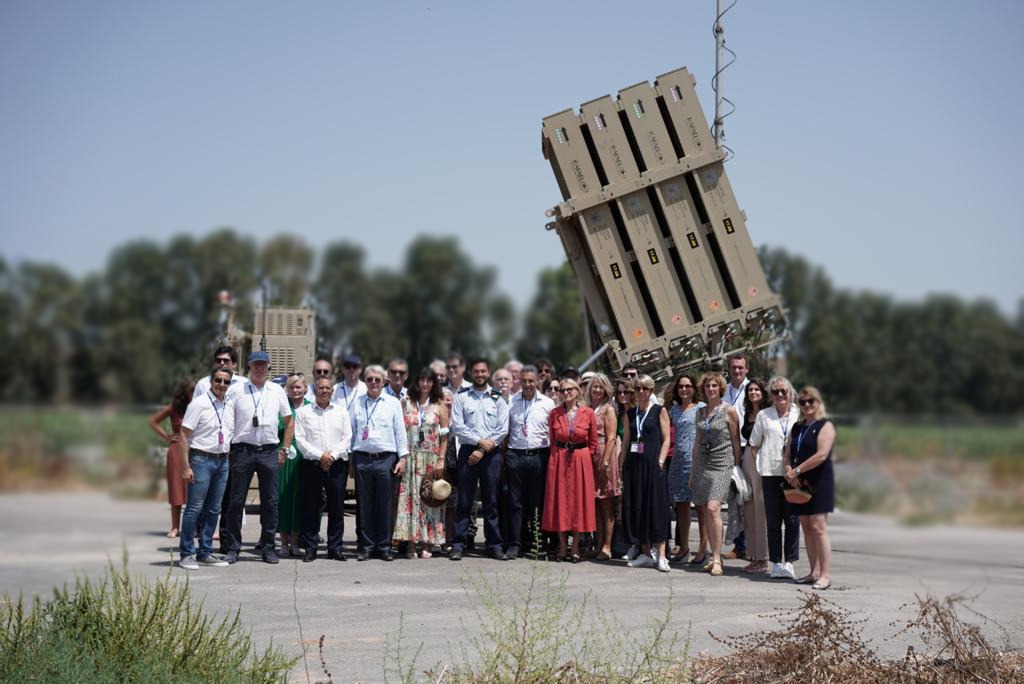 ELNET Hosts the Largest Diplomatic Delegation in Israel in 18 Months

ELNET continues to build bridges between Israel and Europe despite the difficulties imposed by COVID. Last month, ELNET hosted the largest diplomatic delegation to visit Israel in 18 months, and the first to meet with Israel’s new political leadership.

The delegation included 36 Members of the French Parliament from a broad spectrum of political parties, the majority visiting Israel for the first time.

The visiting lawmakers met with senior officials including Israel’s Prime Minister Naftali Bennett, President Isaac Herzog, Speaker of the Knesset Michael Levy, and the head of opposition Benjamin Netanyahu. The visit included tours of Yad Vashem, Jerusalem’s holy sites, and Israel’s southern border with Gaza, as well as a visit to an Iron Dome air defense battery, and meetings with local officials including the Mayor of Sderot. Professor Ran Balicer, head of Israel’s advisory panel on COVID-19, briefed the lawmakers on Israel’s world-leading vaccine campaign and efforts to fight the pandemic.

President Herzog called on the MPs to work towards a French boycott of the anti-Israel Durban conference. To date, six European countries have boycotted the event, including Germany and the UK. Prime Minister Naftali Bennett and former Prime Minister Benjamin Netanyahu focused on the imminent Iranian threat and the rising tide of antisemitism in Europe.

During the trip, several French parliamentarians briefed the press on France’s changing view of Israel due to concerns about Iran’s nuclear program and support for terrorism.

MP Constance Le Grip, representing the opposition Republican party, stated: “Israel is the only real democracy in this region, and for me, it is important to be politically active in supporting this very particular, very unique, and very strong democracy.”

“We are fighting terrorists, and Hezbollah is clearly a terrorist organization, so we are focused on this question,” noted Senator Francois Bonneau, a member of the Foreign Affairs, Defense, and Armed Forces Committee in the French Senate. “And we know that Iran is behind them of course,” he added.

MP Phillipe Latombe from the Democratic Movement party, a member of President Emmanuel Macron’s coalition, noted that the French media is largely responsible for fostering anti-Israel attitudes. “Media in France are very keen on the Palestinian cause. They are mostly left wing. They use the word apartheid,” he said. “We saw in the Knesset today Arab members. They have the same rights.”

MP Pierre Henri Dumont, a member of the Foreign Affairs Committee in the National Assembly, stressed the importance of improving the education system to address the growing antisemitism in France: “What we need to address as politicians and also as French citizens, is that the Jewish community (is) at the center of French society,” he declared. “If we lose this part of society, the Jewish community, Jewish history, we are losing a part of French history. And we are losing a part of what created France.”

“We are pleased to see the growing interest in Israel across Europe, particularly in France, and are very much encouraged by the strong attendance of legislators. We trust that this work will make a difference,” said Dr. Arié Bensemhoun, CEO of ELNET-France.