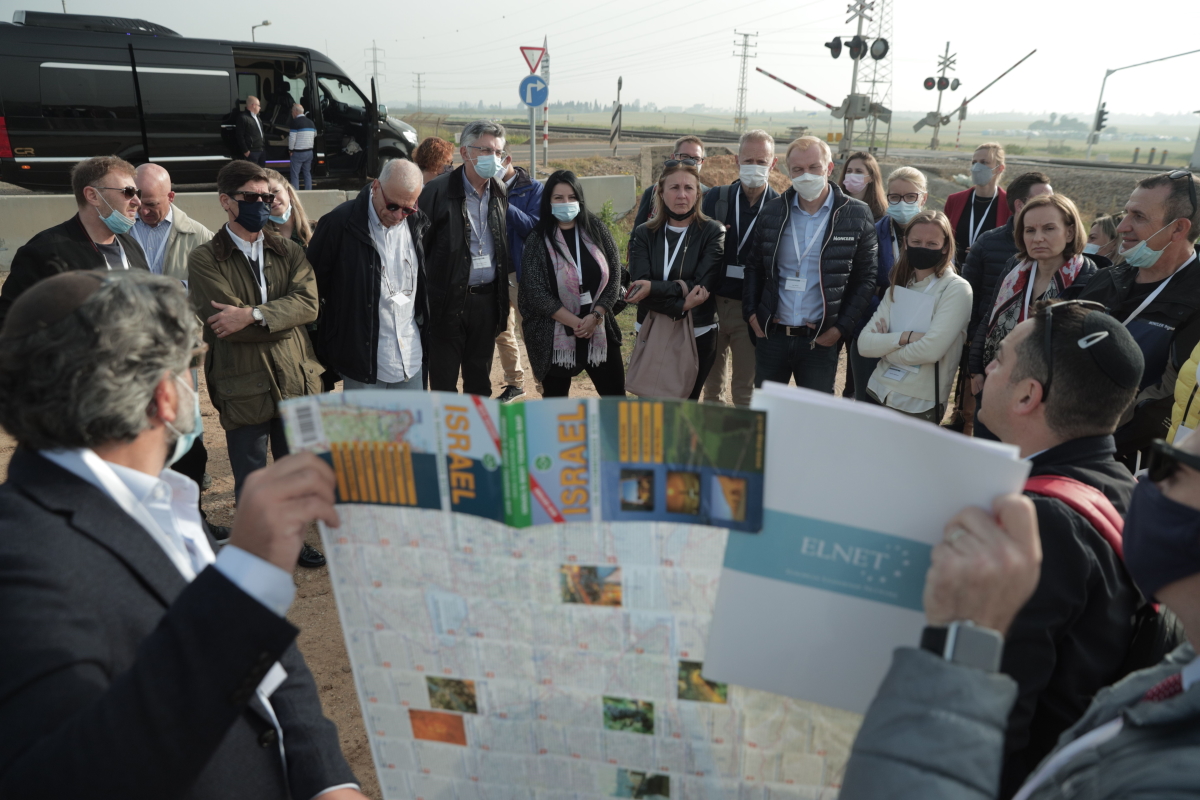 More than a dozen ambassadors and senior diplomats, currently based in Israel, representing key European countries, including the UK, Spain, France, Belgium, and the European Union, flew to Israel’s North for a strategic tour at the country’s border with Lebanon. The program, organized by ELNET in cooperation with the Israel Defense Forces (IDF), presented the regional threats posed by Hezbollah and Iran.

The tour took place just before the official visit to Europe by President of Israel Reuven Rivlin and IDF Chief of Staff Lt. Gen. Aviv Kochavi. This week, President Rivlin and Lt. Gen. Kochavi are meeting with the Presidents of Germany, France, and Austria to discuss regional challenges, Tehran’s nuclear program, and the ICC war crimes probe.

Touring Israel’s North with helicopters, the diplomats saw the Blue Line – Israel’s border with Lebanon – from an aerial vantage point. They also went into a Hezbollah terror tunnel to witness first-hand the complex threat posed by the terrorist group.

Seeing Israel from above is the only way to understand its precarious security situation: at its narrowest, yet most densely-populated area, the country is only 15 kilometers (9 miles) wide.

At the Biranit military base at the Israeli-Lebanese border, Brig. Gen. Oren Setter, head of the Israeli military’s Strategic Division, provided the delegation with a strategic overview, focused on Hezbollah activity as well as the UNIFIL – UN peacekeeping force in southern Lebanon. Many of the European countries present have troops in UNIFIL. A few days before an important UN debate on the peacekeeping force in Lebanon, Brig. Gen. Shlomi Binder, Commanding Officer of the 91st Division and responsible for Israel’s northern border, called for urgently strengthening UNIFIL’s mandate, as Israel faces a new wave of Hezbollah attempted attacks and dangerous escalation is looming.

After inspecting one of the 80m deep terror tunnels built by Iranian-backed Hezbollah to target Israeli civilian communities at the border, the European diplomats expressed their astonishment at the Hezbollah terror infrastructure and the challenges to Israel’s security at the Northern border.

“I was deeply shocked by what I saw, how much energy and time Hezbollah spent on something like that. You have to see it to believe it,” Belgium’s Ambassador to Israel Jean-Luc Bodson said. “If all that money had been dedicated to something more positive, for the benefit of the Lebanese population, for example, to protect them from the terrible explosion that happened in Beirut, it would be better,” he added.

“You see the investment, the time, the determination that went into it and you hear very clearly from the IDF the threat that it posed with fighters that could come through those tunnels to attack the civilian communities. They could have done horrendous harm to innocent people,” added UK’s Ambassador to Israel Neil Wigan.

“We have a common position on this issue. We also have sanctions in place for Hezbollah. Slovenia in December took additional measures and designated Hezbollah as a terrorist organization,” noted Slovenian Ambassador to Israel Andreja Pukart Martinez.

The program was the second in a series of tailored strategic tours for European ambassadors stationed in Israel, following a visit to the Gaza border last September. While foreign delegations from Europe are precluded from visiting Israel due to COVID-19, ELNET designed this program to offer European diplomats an in-depth strategic overview of the threats Israel faces at its northern border.

This program was made possible in part by the generous support of the Genesis Foundation.