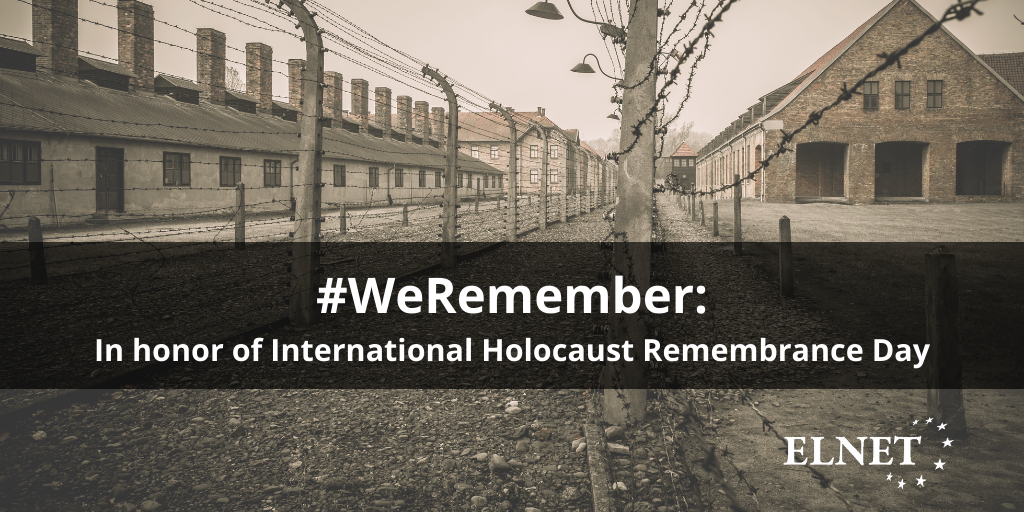 To mark this year’s Holocaust Memorial Day, ELNET UK has issued a Special Bulletin, highlighting news coverage of this important day. We are honoured to be able to feature the following messages from the Holocaust Education Trust, Holocaust Memorial Day Trust and from our own Patron, Rabbi Baroness Julia Neuberger in our Bulletin:

“On Holocaust Memorial Day we remember the deliberate murder of six million Jews and five million Romany, gays, political prisoners, and other innocent victims. We also honour our survivors; we reflect on their stories of horror and of hope. Working as an oral historian at the Imperial War Museum, I interviewed people who were driven into in ghettos and labour camps, went on forced marches, were in death camps such as Belsen, Dachau, Auschwitz. Their experiences and testaments – their memories and their loss – are the reason why we must fight antisemitism wherever we find it. Holocaust Memorial Day is a reminder to us all of the darkest dangers of where hatred and intolerance can lead. Humanity is better than that; we must focus on what we share not on what divides us, to build understanding, respect and peace.“

“Today we mark Holocaust Memorial Day, the 77th anniversary of the liberation of the former Nazi concentration and death camp Auschwitz-Birkenau. We remember the six million Jewish men, women and children who were murdered by the Nazis and their collaborators, and we pay tribute to those who survived. As the Holocaust moves further into history, it is incumbent on all of us to grapple with the truth of the past, to hear the stories of the survivors, and to pledge to never be silent in the face of the antisemitism and hatred that allowed the Holocaust to happen.”

“Holocaust Memorial Day is about remembrance, and now more than ever, we have a duty to remember that the Holocaust was not just a Jewish tragedy, but a reminder to all of us of the fragility of civilisation. Our world is increasingly vulnerable to divisions and prejudices with hatred, intolerance and discrimination a lived reality for many people around the world. In our digital and interconnected world, it has become easy to spew out hate. So, as we reflect on the horrors of the Holocaust and other genocides in Cambodia, Rwanda, Bosnia and Darfur, we must remain vigilant and actively stand up to prejudice in all its forms. And as we mark Holocaust Memorial Day, we reflect on two simple words: One Day. One Day, I hope we will read about genocide in history books and not in daily newspapers. The memory of victims of past atrocities should inspire us to make this One Day a reality.”

“Holocaust Memorial Day always arouses conflicting emotions in me – remembering those who were murdered, be they family, fellow Jews, Sinti, gays, left wingers, Poles, and so many others is of course of enormous importance. And doing it formally – nationally and internationally – makes a particular impact. But at the same time, I want to remember the people who helped; who stood up bravely against racism, antisemitism and intolerance and lent a hand to those who were captured, starved, tortured and murdered. This year I’ve particularly been thinking of diplomats who helped desperate Jews escape Nazi Germany and Austria: Robert Smallbones, Arthur Dowden, Frank Foley, Chiune Sugihara from Japan, Aristide de Sousa Mendes from Portugal and Varian Fry from the US. And I am reminded of our responsibility today, to help asylum seekers worldwide as they struggle to flee the dangers Afghanistan, of Pakistan, the DRC and Yemen. We must remember the dead, of course, but let’s remember those who saved lives. And celebrate them, and ask others to follow their example.”