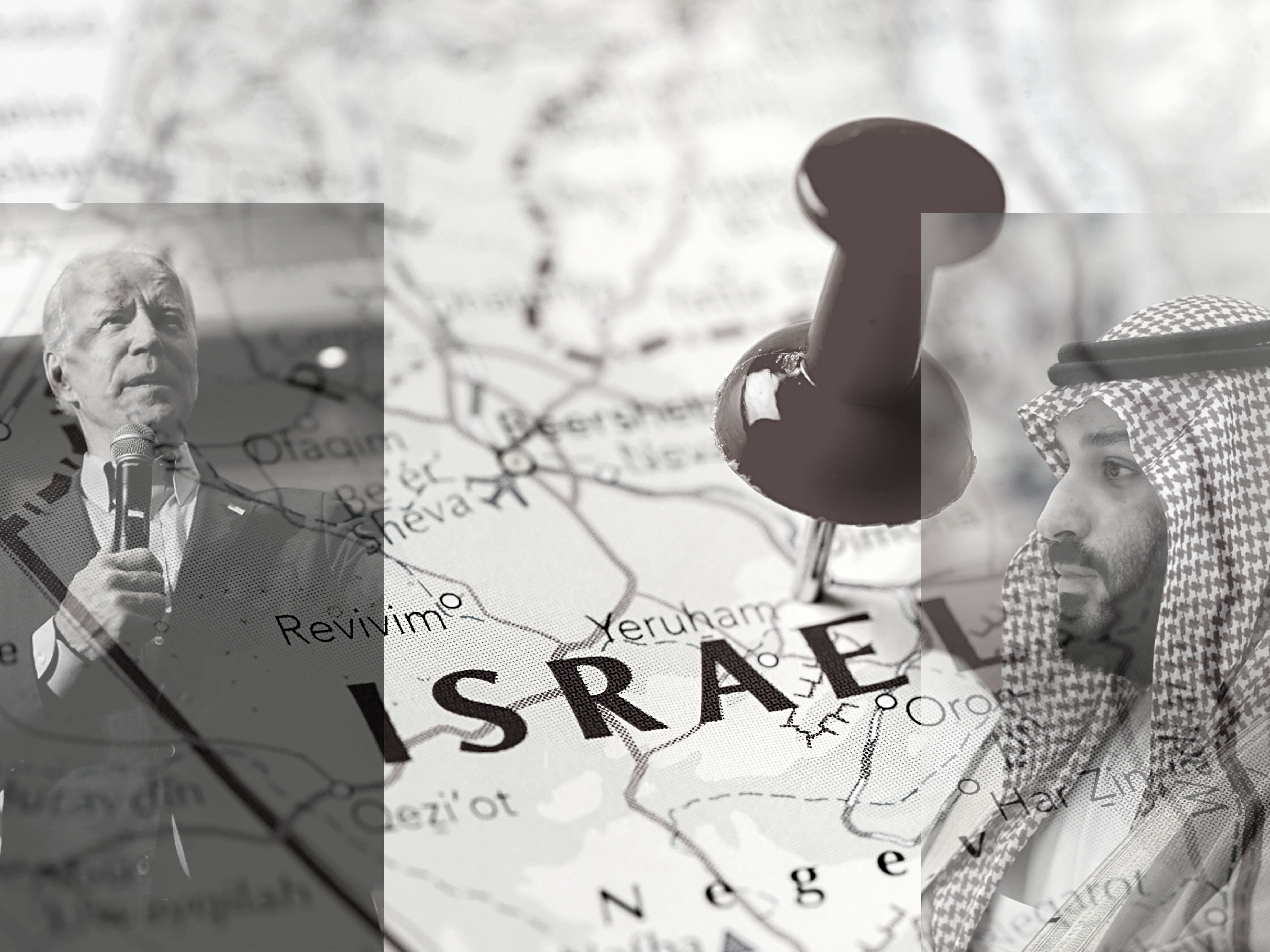 Some bold strategic moves by Israel could lead to diplomatic achievements far greater than mere flight rights over Saudi Arabia.

President Biden’s upcoming visit to the Middle East is a direct result of the global changes caused by the war in Ukraine. The international order is being reshaped. The world is on the verge of an economic recession, faced with inflation and an energy crisis. The leadership of America and Biden personally is set to be tested by voters at home and allies and rivals abroad. Under these circumstances, the Middle East re-emerges as an important theatre of great power competition, and as a major feature on the map of US interests, after the Obama, Trump, and Biden administrations sought to reduce US involvement in the region.

The US-Saudi equation and the Israeli Angle

Biden will begin his journey in Israel, but its focus is Saudi Arabia and the Gulf states. His main win will be Saudi Arabia agreeing to significantly increase oil production and inject it into global markets. Contrary to President Macron’s recent statements, Saudi Arabia and the UAE can add several million barrels a day to their output. Biden seeks to lower the price of a barrel of oil, currently ranging from $100 to $120; to reduce Europe’s dependence on Russia; to impair Moscow’s economic levers and financial strength; and to reduce Tehran’s revenues, thereby aiding in the negotiations on the nuclear agreement. Above all, he seeks to return the price of a gallon of fuel at US gas stations to a tolerable level for the American voter.

President Biden, who has always taken a realistic approach to foreign policy, understands that he must reboot his relations with Saudi Crown Prince Mohammed bin Salman (MBS). Bin Salman remains toxic in Washington, especially on the left of the Democratic Party, due to the murder of journalist Jammal Khashoggi in Turkey, human rights concerns, and the war in Yemen.

The Saudis have broader interests than rehabilitating MBS, though that is a vital objective for them. The kingdom seeks deep and solid guarantees of deep American involvement in the Gulf, and in Saudi Arabia’s security, in the face of the growing threat from Iran and its proxies. In the background is the Saudi “trauma” of the crushing Iranian attack on the kingdom’s critical oil infrastructure in September 2019, and the Trump administration’s dithering response. It is likely that any such US guarantees will be accompanied by a US demand that Riyadh tamp down its warming ties with Beijing.

While Israel is not at the centre of immediate US and Saudi interests, it still has a role in the equation. This goes beyond the issue of Israel needing to agree the transfer of the Tiran Straights islands (Tiran and Sanafir) from Egypt back to Saudi Arabia – an issue that Israel has a say over as part a of the Israel-Egypt peace treaty.

On the eve of the midterms, Biden needs a visit to Israel, and a step forward in Israeli normalization with the Gulf states, to assuage criticism in Washington over thawing relations with MBS, and to score a foreign policy achievement as one who expanded the circle of peace in the Middle East. The Saudis, for their part, understand that advancing their goals during the presidential visit also depends on their ability to provide Biden with an achievement on the Israeli front.

How to make the most of the potential strategic opportunities of Biden’s visit?

Under these circumstances, Israel should not settle for minor moves of obtaining overflight rights over Saudi Arabia in exchange for agreeing the transfer of the Tiran Straights islands to Saudi sovereignty. This would be settling for a kind of ‘Abraham Accords 1.1’ and missing an opportunity to upgrade to ‘Abraham Accords 2.0’. Israel has a deep interest in leveraging the visit for a broad political process that will include tangible achievements, including in the fields of normalization and strengthening the architecture of peace; regional alignment against the Iranian threat; and bilateral relations with the US administration.

Israel must create a tripartite framework in which each of the three parties – the US, Saudi Arabia, and Israel – will advance important strategic goals with the help of the other two. As ever, there are no free lunches, and it is clear that all parties will have to pay in exchange for the benefits they accrue.

While the key elements in the equation between Saudi Arabia and the US, as described above, are well understood, Israel’s role in the framework has not yet been defined. Therefore, initiative and creativity are needed to expand the pie, and shape a triangular strategic process that delivers a political and security breakthrough of the first order.

The achievements for which Israel must strive

In the diplomatic sphere, Israel should aim for a full peace agreement with Saudi Arabia. As conditions for full normalization are not yet ripe, it should strive at the very least for clear progress in bilateral relations. This should go beyond security and intelligence cooperation which is already deepening behind the scenes and becoming more public. So at the formal legal level for example, it would be appropriate to take symbolic steps that give expression to the existing reality, such as non-belligerency agreements or mutual recognition.

On the practical level, trade and economic barriers – for example relating to visas for businessmen, investment agreements and so on – should be removed; direct flights should be opened from Israel for Muslim pilgrims from the country and the territories to Mecca; and written understandings should be established regarding the islands of Sanafir and Tiran, including guarantees of Israel’s freedom of navigation through the straights.

With respect to trade-offs from the US, the list is no less substantial. Israel needs to ensure that President Biden reiterates his stated commitment that Iran will never have nuclear weapons, and in practice forms a plan that ensures this, including through the formulation of an Israeli-US agreement to prevent Iran’s nuclearization. Israel should also ensure that it is a full partner in the technological alliance of democracies the US is building as part of the great power competition. It is also important that the US continues to guarantee the preservation of the security regime in Sinai, in accordance with the peace treaty with Egypt, including the demilitarization of the peninsula and the preservation of freedom of navigation.

And what will Israel have to pay?

To realize these strategic benefits, Israel will be required to provide Riyadh and Washington with trade-offs with respect to the Palestinians, the ‘present absentees’ in the whole process. The obvious sensitivity and political risk will lend credibility to the “pain” of any Israeli concession in this context. Israel can initiate a renewal of the dialogue with the Palestinian Authority, not necessarily as a diplomatic negotiation but rather as a comprehensive move to strengthen and enhance governance and daily life in the PA – proposing a kind of Marshall Plan for the Palestinians. With a transitional government in place and a fifth election ahead, an Israeli declaration of a two-state goal in the spirit of Netanyahu’s 2009 Bar-Ilan speech, or a willingness to see the Arab peace initiative as “a basis for negotiations with necessary changes as a result of the facts on the ground,” could be an important contribution to the grand deal. Accelerated development in the West Bank will also serve Israel, and will give room for Saudi and Gulf involvement in the advancement of infrastructure and high-impact projects, that will help stabilize the security situation.

In the list of benefits Israel can offer the US – beyond the Palestinian sphere, which is the most important – Israel can propose to deepen its commitments in the context of great power competition in two dimensions. First, it can contribute even more to America’s tech efforts and improve its own control over the transfer of technology and innovation to China, a supreme US national security interest. Second, it can take a clearer stance on the side of the West against Russia in the war in Ukraine.

Israel’s additional offer to Saudi Arabia will be the deepening of security cooperation, mainly in the areas of missile and UAV defense, while ensuring a step-by-step approach, and maintenance of Israel’s qualitative edge.

{A tripartite package of this kind would also be of enormous benefit for Europeans, and European leaders should consider how they can promote and legitimize it. European states also need the injection of Saudi oil into the markets, especially as they wean themselves off Russian energy, and would be pleased to see the Palestinian issue put back on the regional agenda. They can contribute on one level by setting aside their misgivings and supporting the gradual rehabilitation of MBS. This might be helped if MBS can reposition himself as a regional peacemaker. Europeans can also play an important role by welcoming an Israeli reaffirmation of the two-state solution and by embracing a Gulf-funded infrastructure package for the PA, even if this falls well short of a fully revived peace process and a clear pathway to Palestinian statehood, which are currently far out of hand.}

In conclusion, Biden’s visit provides Israel with an opportunity to expand the Abraham Accords and to upgrade relations with an extremely important Arab country. To make the most of this strategic opportunity, Israel must do its part. Limited measures – such as “overflights for islands” – would miss an opportunity to generate a broad tripartite deal to tangibly advance Israel’s standing in the region and with the US. This requires some Israeli diplomatic payment in the Palestinian sphere. Having dispersed the Knesset and terminated the constant threat of coalition collapse may actually help PM Lapid to take substantive decisions that, even during his short term, can deliver a breakthrough that consolidates Israel’s important alliances with the US and countries of the region.

The Author is Maj. Gen. (res.) Amos Yadlin, the former Head of the Israeli Defense Intelligence, former Director of the Institute for National Security Studies (INSS), and senior security and foreign policy expert. Maj. Gen. (res.) Yadlin is a senior advisor to ELNET and chair of ELNET’s Forum of Strategic Dialogue.

You can also read this article here

PrevPreviousA Delegation of Members of the German Bundestag Interior and Homeland Committee get a glimpse of the upcoming election campaign
NextELNET’s GINSUM 2nd Digital Health Delegation: Advancing the Healthcare RevolutionNext